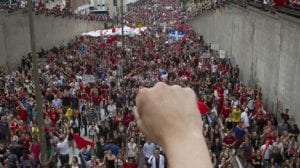 A couple weeks ago close to 200 people came together at Twin Oaks, a commune in my home county of Louisa, Virginia, to discuss various elements of living in community-cooperative businesses; community gardens; consensus-based decision making, etc. One of the participants wrote a short blog post talking about living in a rural commune in the context of the recent Occupy movement. He noted the popular assumption that people living in such a place are choosing to turn away from the larger world in favor of an insular way of living. But for every person who makes this choice, he argued, there is another who is getting connected to outside activism, even from the seemingly isolated outpost where they live.

There are actually two communes in Louisa—Twin Oaks, the oldest in the country, and Acorn, a recent offshoot. At Twin Oaks some 100 people live and work together. They have thriving businesses—for years Twin Oaks has made and sold hammocks, and now they make tofu, too; Acorn grows and sells heirloom seeds. All these products are widely available in catalogs and stores. These are not stereotypical “isolated” groups cutting themselves off from the larger economy. Instead, they engage with the market economy and use it to support their particular goals.

They also get involved to a certain extent in the larger community. Acorn members helped start a community garden in the county this year that has produced a substantial amount of fresh produce for the local food pantry. They attend the local agricultural fair to share their perspective on growing methods. But at the same time, these groups’ very nature calls for them to focus their efforts internally for the most part. After all, in the surrounding county the idea of living communally is an unfamiliar concept, unless you are talking about immediate family.

The blogger’s point is that people living in community have much to offer the larger Occupy movement, and other groups engaged in social change, about how to structure communication and systems differently from the norm. We should all welcome the input these communities can give those of us trying to make a dent in the “corporatist” path of mainstream society.