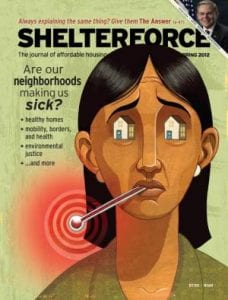 As an environmental studies major in college, I found myself as part of a cohort within the department that was concerned with the relationships of poverty, justice, and urban revitalization to environmental sustainability. We were in the minority at the time, and it was tiring.

But it did force me to answer the question “Why does environmental justice matter to the environmental movement?” “We get it,” my professors would say. “There is injustice in the distribution of environmental hazards, like there is in practically everything else, and that sucks, but why is fixing the injustice an environmental concern?”

I struggled to articulate it, but finally I came up with this: If there were no people it was acceptable to dump on, pollute, or poison, then we would have the momentum to end those practices. We would have the impetus to pass the needed regulation, invent the cleaner processes, and start the needed clean up. Environmental justice is about saying that no one should be downstream.

There could be a parallel in healthy housing.

If it were not acceptable for anyone to suffer from substandard housing or from the problems of disinvested neighborhoods and unequal access to resources, then many of the public health issues facing us would be automatically reduced. The flip side also holds: if the rates of lead poisoning, asthma, and diabetes affecting poor and underserved populations were not acceptable, then everyone would have better housing and neighborhood conditions.

And then we would no longer see things like the 20-year life expectancy gap between people living just a few miles apart in Baltimore’s poorest and wealthiest neighborhoods. I see this as the thread that connects all of the articles in this issue, which include environmental justice campaigns, the circular relationship between foreclosures and health problems, and community groups taking steps to address the implications of their work on the health of their constituents.

There has been a fair amount of discussion on the health implications of fair housing and moving to communities of “higher opportunity.” Research shows reduced rates of obesity, diabetes, and asthma among those who were supported in their desire to move out of disadvantaged neighborhoods. Phil Tegeler makes a strong case for supporting these voluntary programs for children with health problems.

But we have to be careful about looking to moving people as the primary answer. Despite the various health challenges that face folks in underserved communities — such as food deserts, lack of walkability, and substandard housing — disrupting and removing people from those neighborhoods and their social supports and social networks also has health effects. Mindy Fullilove writes in her book Root Shock that such displacement “undermines trust, increases anxiety about letting loved ones out of one’s sight, destabilizes relationships, destroys social, emotional, financial resources, and increases the risk for every kind of stress-related disease, from depression to heart attack.” As Linda Leaks, a community organizer in Washington, D.C., said at a panel at last year’s National Low Income Housing Coalition conference, “I’ve seen people literally die from not knowing where they are going, from the anxiety of not having a community.”

Fullilove argues that addressing health disparities requires more than partnerships between the medical field and community development organizations; it requires dealing with the “sorted out” and unequal nature of neighborhoods in the first place — for everyone, not just a few.

You’ll notice a new column launching in this issue of Shelterforce. The Answer is a one-page response to questions many of our readers find themselves answering over and over, whether to colleagues, potential partners, funders, policymakers, or the public. It will take a slightly different format each time, depending on the question, but it will always be easy to copy or print  and free to distribute with our credit on it. We really want to hear how you are using it, and also to get your suggestions for other questions to answer: let us know about both at theanswer@shelterforce.org.

You’ll also notice something a little different about our reviews column in this issue. While we enjoy a full-length book as much as the next person, we realized that there’s a lot of important material in the field being produced as shorter reports — and that they are just as useful and relevant to our daily work as the more detailed books.