On Nov. 5, 2011, Bank of America had just withdrawn their threat to levy a monthly debit card fee, the major lenders were under fire from attorneys general for abusive lending practices, and the Occupy Wall Street protests coupled with an already-existing bank accountability movement had been giving rise to a lot of people who wanted to do more than symbolically protest the big banks.

So they voted with their feet, organizing actions like that of New Bottom Line affiliate People Acting in Community Together, which organized the withdrawal of millions of dollars of congregational accounts from Wells Fargo and Bank of America in October in response to their foreclosure-related practices. Then an individual Facebook user coined November 5 as Bank Transfer Day, encouraging individuals to move their money to local banks and credit unions by that date. Larger groups involved in bank accountability organizing, from New Bottom Line to MoveOn, took advantage of the momentum to expand their “move your money” and disinvestment campaigns or launch new ones, garnering a wave of media attention and mass account closures.

All told, more than a million Americans moved their money from banks to credit unions in 2011, with the Credit Union National Association reporting 650,000 new accounts opened at credit unions in the weeks leading up to Nov. 5 — that’s 50,000 more than were opened in all of 2010. US Action reported as of Jan. 31, 2012, over $57 million worth of accounts moved and recorded with their site, only one of several advocating this kind of action.

This is a victory for the consumer and there’s little doubt that member-owned banks without the gratuitous fees and profit flowing to distant corporate headquarters can serve communities and customers well. That said, credit unions and small banks are not covered by CRA, and according to one National Community Reinvestment Coalition report, “credit unions underperformed banks on 64 percent of lending indicators designed to measure the provision of financial services to low- and moderate-income and minority people and communities.” “Large credit unions function like banks, but they are not regulated like banks,” said John Taylor, president and CEO of NCRC. “The report’s finding that credit unions lag banks at meeting the credit needs of underserved communities is troubling, because credit unions were chartered with the express purpose of serving people of small means.”

Perhaps the momentum to move money out of too-big-to-fail banks is not only a chance to vote with our feet, but also an opportunity to call on all banking institutions to adhere to fair lending standards. 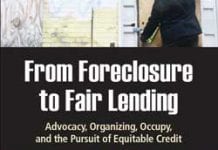