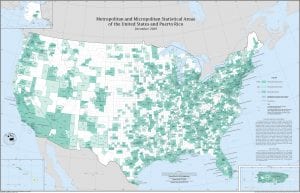 The other day at a meeting I heard some residents complaining that Virginia’s transportation department won’t pave their road. I had to feel for these folks, with their cars forever covered in dust from the dirt road, but I was also thinking that as lightly populated as their road is (and every other road for miles around), it’s no wonder they’re way down on the highway department’s priority list.

After all, we live way out in the country, and it says right in our county plan that our number one priority is to maintain our rural character. Sure, we’re growing, but we’re putting the growth in certain, limited geographic areas to keep the rest looking much as it always has. Dirt or gravel roads might be a part of maintaining that character, though we do want to pave the busier roads, and we certainly want to fill the potholes so people don’t risk life and limb trying to get home.

But here’s a funny thing. According to the United States Census, we don’t live in a rural area at all. Not even close.

I hadn’t looked at statistics in a while, so I forgot how deceptive they can be. But while perusing a graphical map of the U.S. entitled “College Degrees in Rural Counties: 2010,” I noticed that there was no data shown for our county. Nor was there data for many other places in Virginia that are comparable to our area. Then I saw that there was also no data for the entire state of Massachusetts, and I started to understand that the Census was defining rural in a peculiar way. The Census divides the country into metropolitan, micropolitan, and rural areas. A metro area has a core urbanized area with a population of 50,000 or more. A micropolitan area has a core city, too, but with a population of 10,000 to 50,000. If you’re not anywhere near an urban center with at least 10,000 people, then you’re truly rural.

The Census also adds that to be within a metro or micro area, your community must have a high degree of economic and social integration with the urban core. For our county, the urban core is Richmond, the state capital. What is true is that many of our rural dwellers commute into the Richmond suburbs or downtown to work. For people on the east side of the county, the commute takes around 45 minutes without heavy traffic, over a distance of maybe 40 miles. If the fact so many people from our area do that drive every day spells economic and social integration, so be it. But to me that doesn’t mean we’re not rural.

We still live in a rural community, but maybe it makes more sense to refer to us as the “rural fringe.” Our dirt roads may make us still look like the country, but over time our daily routines are making us look to data collectors like we’re part of exurbia.