Like many states over the past several years, New York has been implementing fiscal austerity measures to rein in expenses in the face of struggling revenues. But what will be left of New York communities when the dust settles, both those historically disadvantaged by public policy and private market discrimination, and those most recently hit by waves of foreclosures? Today, a state program providing critical operating support to nonprofit organizations serving low- and moderate-income neighborhoods is being threatened with defunding, jeopardizing the sustainability of these nonprofits and the vulnerable communities they serve.

New York was one of the first states in the country to provide direct operating support to an emerging system of nonprofit service provision to economically disadvantaged communities. The creation of the Neighborhood Preservation Program in 1977, followed by the Rural Preservation Program in 1980, showcased the growth in numbers and importance of such organizations in improving housing conditions throughout the state. It acknowledged the lack of stable, long-term funding to sustain such significant work, and was established to fill this void. For 35 years now, the state has funded nonprofits it designates as Preservation Companies (213 organizations in 2011) that are trying to address quality of life issues across urban and rural communities throughout the state. These funds are targeted to administrative and planning activities, giving Preservation Companies the ability to sustain annual operations and the predictability to plan for the future. While current regulations allow for up to $100,000 in annual funding, groups have received closer to $55,000 on average in the past two years after a 40% reduction in program funding in 2010.

Preservation Companies (PCs) assist thousands of households with a diverse array of services, ranging from home improvement, rehabilitation, and new construction, to foreclosure and eviction prevention, to business association support. New York State Homes & Community Renewal, the state agency that runs both Preservation programs, highlighted in the programs’ 2011 annual report that PCs provide 46 percent of all services funded through their locally targeted programs. This includes administering almost 75 percent of all awards under the state’s Residential Emergency Services to Offer Home Repairs to the Elderly (RESTORE) program, and over 60 percent of HOME awards. They note that “NPCs and RPCs have become adept at strategically accessing these programs and leveraging additional resources,” leveraging from $32 (RPCs) to $52 (NPCs) for every $1 invested in them through the Preservation Program funding, or over $568 million for 2011.

Despite this track record, the current state budget has zeroed out funding for these programs “in order to preserve resources for other critical housing initiatives,” according to the 2011 budget highlights for New York Homes and Community Renewal.

Yet the state has also eliminated funding for other critical housing initiatives, such as the Foreclosure Prevention Services Program. This program has funded Preservation Companies and other organizations throughout the state since 2010 to assist homeowners facing foreclosure. A survey covering just 60 percent of state-funded organizations conducted by the Empire Justice Center reported that over the first 20 months (January 2010 through August 2011) these organizations successfully worked out loans and avoided foreclosures on almost 12,000 homes. The Center also estimates that for every dollar invested in the program, the state saves $68 in lost property values and taxes statewide, and that failure to fund this program this year will cost $57.5 billion in direct property losses, indirect losses in neighboring property values, and lost property-tax revenues.

While New York’s action to defund Preservation Companies seems over the top, it is not an isolated incident. Massachusetts, a state with one of the most comprehensive support systems for nonprofit community development, nixed its CEED operating support program in 2003 after over 25 years of existence. Florida let a similar funding program sunset in 1998 after less than two decades.

Should we be surprised by the retrenchment of such critical funding to nonprofit service organizations and economic developers? Maybe and maybe not. On the one hand, times are tight for state governments and budgets are only so flexible, so they must make cuts somewhere. The Rockefeller Institute for Government reported in January that 36 states were still below their peak revenues, although New York State has almost caught back up to its 2008-2009 peak tax collections.

On the other hand, the nonprofit delivery system of housing, community, and economic development production and services was directly fostered and developed with active support of government. Nonprofit community economic development organizations emerged in the 1960s as a closer-to-home strategy for helping economically disadvantaged communities help themselves overcome past discrimination and disinvestment by the public and private sectors.

These locally based organizations represent the people and places that they serve, are mission-driven, understand the needs and opportunities of the local contexts in which they work, and have the professional skills necessary to do their jobs well. If government will not continue to support this locally based, lower-cost option to caring for its communities, who will?

Photo by wallyg via Creative Commons 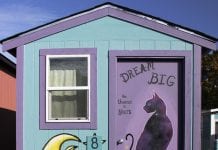 Are Tiny Homes a Piece of the Affordable Housing Puzzle?