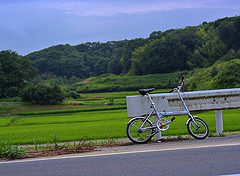 Surprise! People in small towns like to walk and ride bicycles nearly as much as people in cities do. That’s the word from a report just released by the Rails to Trails Conservancy. Since the statistics show that small town citizens do in fact walk and bike, they have the same potential to benefit from new sidewalk and recreational trail projects as urbanites.

Notice I said “small towns,” not “rural areas.” The report is focused on small towns surrounded by rural areas. This suggests that rural dwellers can benefit from sidewalk improvements in and immediately around their towns. It’s worth observing that small towns are a very different animal from the countryside that abuts them. In some ways, their relationship is comparable to that of cities and their neighboring suburbs. And while many Americans do live in rural small towns, much more of the rural population lives outside towns and doesn’t live the same way people in the towns do.

Many, if not most, small towns have sidewalks along at least one side of commercial streets, and they often have crosswalks as well. Finding bike lanes and trails in towns is more of a stretch, but when a small town is really tiny, say 2,000 people, this degree of investment in cyclists and pedestrians’ well-being may not be useful. Walking and biking is definitely something you can and should do in a town.

Step outside the limits of a small town, and a different world awaits. In rural areas, as the report notes, cars travel fast on state highways and country roads. Speed is the priority and most of the time, you won’t see a soul on foot or on a bike. This is true even on secondary, back roads, because even these roads tend to have a 55-mile-per-hour speed limit. They aren’t slow-paced neighborhood streets like in towns, they’re arteries motorists use to drive somewhere quickly. These streets never have any shoulders, so there is no place for a person to escape if a vehicle comes charging around the corner.

Even if a small town is big enough to have a significant base of retail and service jobs, perhaps even professional ones, most rural dwellers can’t get there safely from where they live on a bike or on foot. It’s also not practical for them to get there this way, even if it were safe. The distance from the average rural home to the nearest retail or office or civic destination is probably around 10 miles or more.

Some rural communities have found money from federal sources to build substantial trails linking towns or connecting a town center to its outskirts. Indeed, the Rails to Trails conservancy report notes correctly that federal funds are often the only possible way for such projects to ever happen (and therefore we should be wary of continued efforts in Congress to eliminate these funds). While these trail projects can be great successes, an even bigger challenge than building the backbone of a trail network that extends some distance from town centers into the countryside is to build spurs off the backbone that make the trail accessible to rural neighborhoods.

Really, the likelihood that most rural areas beyond small towns will ever have a good system for biking and walking is slim. What rural areas do often have is a wonderful network of back roads. What needs to happen is for more people to make a choice to travel or recreate, to the extent that is reasonable, without a car or truck. When enough people make up their minds to do this, the physical and psychological barriers to getting out of cars will begin to fade away.

Photo by JanneM via Creative Commons.