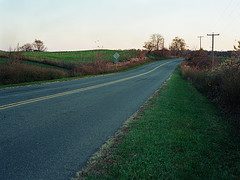 “From concrete to pasture.”

That’s how one might characterize my relocation a couple years ago from Boston to Central Virginia. Boston is a place where a carefully landscaped pocket park nestled amid multi-family dwellings and shops represents the height of civilization. In rural Virginia, by contrast, a squat ranch house set amid a woodlot and rolling hay fields is paradise on Earth. I went from an environment in an advanced stage of hyper-development, in a physical sense, to one where improved property seems inconsequential relative to the starkness or beauty of the land.

But rural Virginia is changing. In the last decade the population of the county where I live grew by 30 percent as residential subdivisions popped up in former fields and fast food and retail giants roosted near the interstate exits. In some ways, the economy here remains tied to the land, with forestry employing many, and some small farms raising livestock and fowl in significant numbers. More and more, though, the consensus among political and business leaders is that we must move away from a land-based economy toward something that looks decidedly different. The race is on with neighboring counties, other regions and other states to capture manufacturing, service and industrial businesses to set up shop. To woo these companies, which require large amounts of land, counties struggle to come up with money to provide basic infrastructure including broadband Internet access and water and sewer connections. Water and sewer service also makes it possible for developers to build clusters of multifamily neighborhoods.

This movement away from rural-style economic development occurs even as we continue to emphasize our rural character, which is so important to local identity. The advantages of bringing large commercial and industrial operations into our county are obvious—more tax revenue to pay for services; more jobs closer to home for our people, etc. It sets up a bit of a quandary, though, given that increased development seems to soften, bit by bit, the bones of the traditional rural infrastructure.

Another way rural communities in Virginia, North Carolina, and elsewhere have tried to develop economically is by growing their artisan and farm-based economies. This is a more grassroots, micro kind of development, and the potential output in financial terms may be much more limited. In southwestern Virginia and in Albemarle and Nelson counties, visitors as well as local residents are encouraged to take driving tours of local galleries, farms, breweries and blacksmith shops. Their money helps people keep doing things for a living that are in keeping with the rural nature of the landscape. In fact, the rural landscape is integral to bringing people to their businesses. If the land was not so beautiful, people wouldn’t see any advantage to driving down winding two-lane roads when they could just park downtown and walk.

We are lucky where we live to have the potential for both kinds of development, one that seems to alter the historical rural character, the other that strives to preserve it. It requires careful planning, though, to not steer ourselves too far in a more concrete direction. We’d like to keep our pastures and hay fields, thank you.