Transit-oriented development has long been a buzz-worthy concept in planning and community development circles, and while there have been real successes in creating affordable housing that is close to transit, we’ve also seen the all-too-common scenario of redeveloping a transit area only to incur subsequent spikes in land values and undermining any affordable intent of a TOD project.

TOD has also long been on the Shelterforce when it comes to equity advocacy and affordable housing. Recently, Miriam Axel-Lute, NHI associate director and Shelterforce editor, attended the National Inclusionary Housing Conference and wrote on this blog that “the need to see inclusionary housing [is] a central component of advancing civil rights and sustainable communities of opportunity.

“Far from merely being a specialized tool for generating more affordable units, [inclusionary housing] can be seen as the heart of ensuring equity-since where you live determines so much about your access to opportunity, ensuring housing choice and affordability is key to helping families achieve their potential.”

The projects that we focus on in this issue — from the Bay Area’s Great Communities Collaborative, to the Twin Cities’ Central Corridor Light Rail Transit, to our cover package of the Atlanta BeltLine — are so much more than just transit projects, but all are directly correlated to public transportation projects.

But what’s happening in Atlanta is important as it’s related to affordability. As Miriam points out in her editor’s note, Atlanta, at the mere whiff of a major TOD project, “saw massive speculative rises in land and housing prices.” This reaction, she goes on to say, “shows us that if we want lower income folks to have access to both the transportation and other amenities that come with investments in transit, we’re going to have to act fast—at the planning stages—to build affordability in.”

As Ryan Sherriff outlines in his article, much of the affordability that is being built in to the BeltLine project is being done by way of a community land trust model. But it was a long time coming for the city, which had tried unsuccessfully on two occasions to sustain a CLT. But as Andy Schneggenberger points out in his piece, Bringing CLTs to Scale in Atlanta, the Atlanta Land Trust Collaborative acts as a “central server” that on one hand serves as a CLT advocate and information provider, and on the other will balance citywide scope with local control of individual land trusts by existing CDCs. This server concept, he notes, provides the political and practical means for success since it’s homegrown, rather than implemented top-down.

That ground-up approach is particularly evident in Atlanta’s PIttsburgh neighborhood. This historically African-American neighborhood developed in postbellum Atlanta suffered from all the trappings of 1960s decline: white flight, suburban growth, “wholesale out-migration by middle-class families,” resulting in a loss of nearly half its population over the subsequent 30 years. By the 1990s, recovery was underway, but in a scenario that played out across the country, the crash of 2008 exposed the mortgage fraud, resulting in defaults and foreclosure that ravaged the neighborhood.

Now, Mtamanika Youngblood and Harold Barnette report in their article, a Pittsburgh community land trust, part of Atlanta’s “central server,” could “blaze a new path for affordable housing success” and thus, the strengthening of this historic community.

Read our coverage here of “The Atlanta Story,” and much, much more. 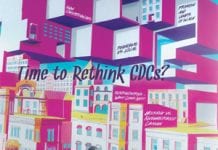 On the Cover: Transformation