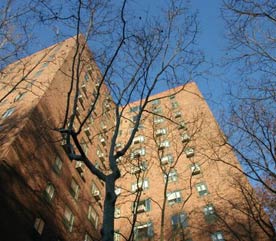 In 2006, Shelterforce reported on the $5.4 billion sale of two colossal apartment complexes — Stuyvesant Town and Peter Cooper Village — on Manhattan’s east side, representing the biggest real estate deal in U.S. history, as well as an era of loose credit and speculation. The deal was a triumph for the highest bidder, Tishman Speyer Properties, and ushered in an era of insecurity for the residents of the 11,232 apartments (more than half of which are rent regulated) that compose what is considered one of the last remaining middle class enclaves in Manhattan. The sale, residents worried, would continue a citywide erosion of rent regulations.

But now, Tishman is at risk of default, with the 80-acre property having lost more than half its value. Tenants are unlikely to face rent increases or evictions, according to The New York Times, but they could face a protracted period of reduced maintenance.

One other note: the New York State Supreme Court ruled in October that the owners of Stuy Town and Cooper Village had illegally raised rent and deregulated thousands of apartments. According to NYT, A rent-stabilized 2BR is roughly $1,300 a month, whereas the average market-rate two-bedroom apartment there can fetch $3,179.