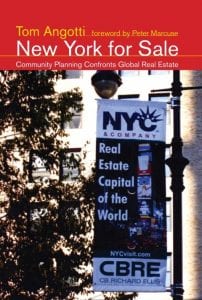 Tom Angotti’s new book, New York For Sale, shows just how frustrating it can be to achieve true community-based planning. He writes that after the city government gave the power to plan to community boards, elected at the neighborhood level, it set about thwarting these boards at every turn. A few neighborhoods have succeeded in seeing their plans win the city’s support, but many others say that the city planning agency more or less ignores them.

The city planners act this way not simply because they see community-based planners as interfering with their ability to design the city as they see fit. There is also, of course, the natural relationship of city government to the real estate industry.

Angotti, himself a former New York City planner and a leader in the international Planners Network, doesn’t see this as evidence that community planning at the grassroots is futile, however. Far from it. He suggests that the mere act of residents getting together to discuss and write down their vision for the future is a transformative one.

I found this book inspiring in spite of its assertion that city planners in New York rarely see neighborhood activists as allies in their effort to build a better city.