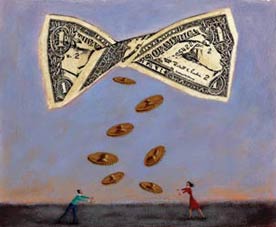 In standard U.S. policy-speak, “poverty” is an income concept. The “poverty line” is an income measure, access to social programs is largely related to income, and when policymakers examine distributional effects of a policy, they turn to income quintiles.

Income, however, provides an incomplete picture of family well-being. Income measures a household’s flow of funds, but that flow can be interrupted. In his recent book High Wire, Peter Gosselin presents disturbing evidence that income volatility in the United States — measured by the percentage of households experiencing a 50-percent decline in income over any two-year period — has increased from 5 percent in the 1970s to 9 percent by 2006. This trend has affected families at all income and education levels.

The volatility trend highlights the need for more than income. Assets, such as equity in a home, a savings account or investments, or a stake in a business provide a cushion that can smooth income, a base to leverage additional assets, wealth to pass on to the next generation. Research into the effect of savings strongly suggests that, even at relatively modest levels, asset ownership creates a future orientation that encourages an individual or family to act to enhance that future, such as by getting more education or saving for a specific goal.

Yet at least a quarter of Americans are asset-poor: They do not have sufficient financial or other liquid assets to live at the poverty level for three months if their stream of income were interrupted. The numbers double in the black and Hispanic populations. Among working families with children who earn up to 200 percent of the federal poverty level, 30 percent have zero or negative net worth and barely half have a bank account — with a median balance of $800.

Traditionally, homeownership has been the path to building assets. In 2004, the median net worth of homeowners was $184,400, compared to only $4,000 for renters. Homeownership has meant financial stability and automatic saving through a self-amortizing fixed-rate mortgage, family stability (generally in a more stable community), and the opportunity of price appreciation. Moreover, because of the leverage involved in buying a home, the benefit of any price appreciation is significantly magnified: 10 percent down on a house whose price appreciates by 10 percent yields a 100-percent return on investment. Few other opportunities for financial leverage have been available to those of modest means.

But there’s also a dark side to homeownership. Financial leverage means that modest price depreciation can wipe out even a sizeable down payment. Adjustable-rate mortgages, with no or negative amortization and big fees, are unstable and can strip rather than build equity. Heavy or unexpected maintenance costs and increases in property taxes or the price of energy can destroy a family budget.

Abandoning homeownership as an asset-building strategy makes no sense. Rather, the next administration needs to pursue three alternative strategies simultaneously: bringing back “good homeownership,” supporting quality affordable rental housing so people who don’t want or are not ready for homeownership aren’t forced into it, and developing other ways to help families of modest means invest for themselves and their future.

We know how to do “good homeownership.” We did it during the 1990s, when we substantially expanded homeownership safely and sensibly. The important elements are quality counseling and fixed-rate self-amortizing mortgages, underwritten based on the borrower’s ability to pay the loan for its full life and with escrows for taxes and insurance.

In this new world of ever-increasing energy prices, good homeownership also requires paying attention to both the energy efficiency and the location of the home near jobs and transportation.

Second, the next administration must reverse the policies of the past 30 years and support quality affordable rental housing. Renting may not sound like asset-building, but good rentals buy people the time and means to save, whether for a down payment on a house or to build other assets.

Third, the next administration needs to promote asset-building policies other than homeownership. There are easy and inexpensive wins, like actively supporting savings bonds. Other policies, like children’s savings accounts, will require more money. Finally, there’s a need for new ideas, such as investment plans for more than retirement, for those of modest income, characterized by easy enrollment and automatic additions, economies of scale and opportunities for diversification, and maybe even some leverage.

For 50 years, we’ve had an effective federal assets policy for the well-off. It’s time for everyone else.