In the late 1990’s the Houston Endowment saw a significant increase in grant requests for faith-based community development projects. It was a goal they supported, and yet, says Grant Officer Donald Sheppard, “We were concerned whether these new emerging groups understood the field and the science of community development.”

Meanwhile, Houston’s College of Biblical Studies (CBS) was hearing from its students that they wanted ministry skills that would help them improve their neighborhoods. “They didn’t really know they wanted faith-based community development,” says John Fosdick, vice president for development. “But that’s what the market was calling these types of skills.”

In 1998, to further gauge pastors’ interest, CBS offered a survey class in community development. It had the highest enrollment of any class at the College. So the college sought funding to create a full-fledged certificate program in faith-based community development. The Houston Endowment liked the idea. “It just made sense that ministers and lay people should have access to the policies and programs and history of the field,” says Sheppard.

Marvalette Fentress, the program’s first director, says they looked for other schools doing similar things, but found only social service-focused urban ministry programs or graduate-level community development degrees. As far as she knows, CBS’s community development certificate, which can be earned as part of a bachelor’s degree or without enrolling in a degree program at all, is still unique.

The curriculum, developed with the National Congress for Community Economic Development, is nuts-and-bolts oriented. Topics include setting up a nonprofit organization, understanding business plans, working with financial institutions, and grant writing. After some introductory courses, students choose a housing or an economic development track where they get a more detailed look at everything from site selection to loan packaging.

Three hundred people have gone through the program so far, mostly pastors from urban areas. “They all come in having a vision already of what they want to do, and a need that’s out there,” says Fentress. “But they don’t have a handle on how to get started, what’s the first step … and the second and third and fourth steps.”

Despite the curriculum’s focus on practical skills, Fentress says graduates still need on-the-ground technical assistance to bring their learning to fruition. So this year the College will begin a small pilot technical assistance program to help their students take the next step.

“Things do take time,” says Fosdick. But, he adds, this is simply another form of ministry, and it can be learned. “It all revolves around sharing ideas that work,” he says. 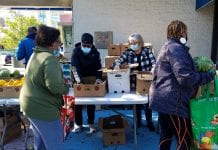