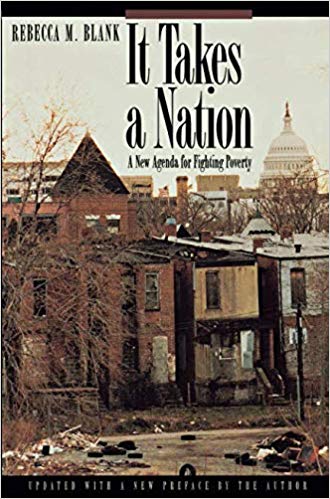 The dramatic changes in federal and state antipoverty programs are leading to renewed interest in policies and strategies for reducing poverty. Borrowing from the theme of Hillary Clinton’s It Takes a Village, Rebecca Blank has combined her knowledge of poverty research and public policy in It Takes a Nation: A New Agenda for Fighting Poverty. Blank, a professor at Northwestern University and director of the Joint Center for Poverty Research, seeks to broaden the understanding of why poverty has been so persistent in the U.S. as well as how to design an effective system of anti-poverty programs.

Blank discusses the fundamental changes occurring in federal policy. Her analysis suggests two challenges: first, that poverty has become harder to address through broad-based economic growth policies. Blank identifies the change in the nature of employment and poverty in the past 20 years. While evidence shows that between 1960 and 1980 a growing economy led to more employment, which was the largest factor in reducing poverty, the positive economic growth of the past two decades has actually seen a slight increase in poverty, especially in the 1990s. Drawing from a growing body of research, Blank suggests a number of reasons why employment has been less effective in leading people out of poverty. Wages for low-skilled workers have fallen more than 20 percent in the past 15 years, coupled with the growing part-time nature of low-wage occupations. Sixty-three percent of all poor families have one worker, yet only 20 percent of these families contain a full-time, year-round worker.

Second, Blank points out that broad-based cash redistribution programs for the poor (AFDC, Food Stamps, WIC) have come under increased attack. She documents the contributions of food stamps, medicaid, supplemental security income (SSI), and special supplemental food program for women, infants, and children (WIC), and other programs to improve the economic well-being of poor families. Her research shows that single mothers primarily use welfare on an intermittent basis when they can’t find work or when family demands are intense. Public assistance payments are not adequate to enable a family to escape poverty, but they have raised family incomes closer to the poverty line and enabled the poor to have more nutritious meals and receive health care.

The scaling back of such programs leaves a remaining set of policy options involving targeted programs aimed at specific groups among the poor and/or focused on particular behaviors. A good example is the federal Earned Income Tax Credit (EITC), which is designed to reward work for low-income wage earners. This refundable tax credit can be as great as $3,000 based on a formula that includes low wages and at least two children in a family.

With the trend toward targeted programs, Blank offers useful policy suggestions and questions including:

Blank is hopeful that our nation can design and implement a more effective system of anti-poverty programs. While she provides a well-thought-out framework for reducing poverty, the book contains no discussion of how to implement an anti-poverty agenda at the federal and state level. The book could have referred to organizations and advocacy efforts that have succeeded in providing financial and technical support to the poor, including major legislation such as the Community Reinvestment Act (CRA), Head Start, and the EITC.

It Takes A Nation nevertheless makes an important contribution in explaining the complexities of poverty alleviation, offering useful suggestions for enhancing public assistance efforts, and demonstrating the need for income support while low-income families develop skills to increase their earnings. 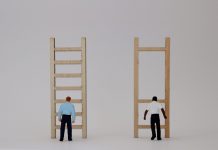 The Racial Wealth Gap Begins With Our Tax Code