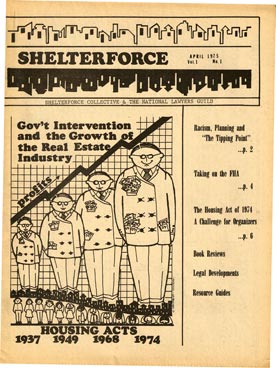 One hundred issues and 23 years ago, a group of tenant activists, community organizers, and legal aid attorneys came together to begin a new publication – Shelterforce – to provide information and a national forum for housing justice activists.

Back then, as today, poor people in urban and rural areas did not own their own homes. They were and are often at the mercy of greedy slumlords, callous or indifferent officials, and public policies that sought to, depending on the fashion of the times, disperse the poor or collect them away from the mainstream.

Decent shelter then, as now, brought dignity, a sense of safety and hope, and a place from which to escape poverty. The Shelterforce Collective knew that to fight poverty and injustice, you had to start at home – the place to plan, to organize, and to create change.

Since then many things have happened. The saddest is that today there are millions more people unable to find affordable and decent shelter than there were in 1975; in spite of the fact that America – its corporations and the top tiers of earners – is richer than ever.

What happened? Well, we all know most of the history. The War on Poverty begun by Lyndon Johnson collapsed under the weight of fear and politics. A succession of administrations aimed at dismantling the “welfare” state made it their mission to eliminate antipoverty and urban programs. The most promising programs were rarely funded sufficiently to succeed.

Throughout these years, communities fought back. One of the most remarkable successes was the Community Reinvestment Act (CRA) of 1976 (see Shelterforce #13, 1978). Thanks to CRA, billions of dollars from the private sector were returned to communities where much of it originated, resulting in tens of thousands of new homes and thousands of jobs.

Also during this time, the community development corporation (CDC) movement (see Shelterforce #47, 1989) grew into an industry. Following in the steps of the Community Action Program of the War on Poverty  (see article), CDCs have grown from a handful of nonprofit organizations fighting urban and rural poverty – often alone and always with too few resources – to thousands of organizations throughout the country. They, along with Community Action Agencies, faith-based groups, and scores of other community-based organizations (CBOs) are active in housing, job creation, training, and human services.

As CDCs have grown, so have the groups that support their work by providing financing, technical assistance, and political advocacy (see article). These organizations have leveraged billions more and have provided much needed national networks to support CDCs and other CBOs.

Even the private sector is beginning to show signs of responsibility (albeit pushed by the weight of law and the ever-present threat of organized protest). For example, after years of hard work, a community development financial institution (see article) is demonstrating to Fannie Mae that by rewriting its loan guidelines, it can help hundreds of thousands of low-income workers become homeowners without increasing its default rate. And our own organization, the National Housing Institute, is examining ways to increase homeownership in low-income and minority communities through tax law.

Even tenancy, long associated with second-class citizenship, is being embraced by national organizations such as the Neighborhood Reinvestment Corporation (NRC), known for its work to revitalize communities through homeownership. NRC is aggressively promoting multifamily housing, including a range of alternative tenure options like community land trusts and mutual housing associations.

Finally, after decades in the crosshairs, the U.S. Department of Housing and Urban Development is no longer a target for elimination. While reducing its staff, HUD is increasing its budget and once again developing important initiatives (see article). Even Section 8 vouchers are again being fully funded and increased in number.

In spite of all these victories, the War on Poor People begun during the Reagan years is still with us. In many ways it has become worse as it has become more subtle. Devolution, a gift of the 104th Congress, hasn’t ended. More and more, the federal responsibility for ending poverty has been shifted to the states and nonprofits. More and more, the emphasis on helping poor people has been shifted to helping low- and moderate-income people. Few, on the left or right, even speak the word poor. Huge financial and human resources have been devoted to homeownership programs. Housing authorities are increasingly targeting higher-income people – the deserving poor. Already fewer than 25 percent of the subsidy-eligible poor receive help, because there isn’t enough subsidy to meet the need.

Perhaps it’s time to revisit the war on poverty? This time the battle can be waged by an army of community-based organizations, national support networks, and federal and state programs aimed at the most fundamental need of the poor, to leave poverty behind.

Today’s battles include drugs, massive central city disinvestment, lousy schools, growing income inequity, and a weakening of the social bonds that hold us together, along with unlivable and unaffordable shelter. One hundred issues ago, the Shelterforce Collective had it right: the key to victory remains in the neighborhood – in the hands of organized residents, innovative leaders, vital community institutions and associations, and all those committed to justice.