Emanuel Freeman’s organizing career began in the mid-1960s, soon after he graduated from high school in Philadelphia’s Germantown neighborhood. In working to make local institutions accountable to the neighborhood, Freeman’s primary target was Germantown Settlement, a community organization that he and other community members felt was unresponsive to the neighborhood’s growing African-American community. That effort eventually succeeded, and led Freeman to a seat on an advisory council to Germantown Settlement, then to a seat on the board, and eventually to a part-time job with the organization.

Today, 30 years later, Freeman is Germantown Settlement’s President and CEO, overseeing a $2.6 million budget and a staff of more than 50. The organization is responsible for hundreds of new and rehabbed housing units in the neighborhood, as well as many businesses, and Freeman is widely regarded as the visionary and driving force behind the organization’s work. (Some chuckle and call him “The Mayor of Germantown.”) What Freeman is proudest of, though, is the “wide array of leadership and leadership talent that has come out of Germantown Settlement.” He points to a city council member and two state representatives who cut their teeth working with Germantown Settlement, along with other local leaders of business, education, and social service.

Freeman is proud of the “collectiveness” and sense of power that has grown in his neighborhood in the last 30 years, but says there is more to come. He envisions a Germantown with “more control over our social and monetary capital, so we can use it in a way to develop our own solutions to our own local problems.” Veronica Barela [standing] has come a long way in just a few blocks. Her office is just around the corner from the site of the North Lincoln Projects in Denver, the public housing complex where she grew up (which has since been demolished). When she was growing up, she recalls, West Denver “was like the United Nations,” with thousands of immigrants making their homes there while looking for work on the railroads bordering the neighborhood.

After studying psychology and public administration at the University of Northern Colorado in Greely, Barela wasted no time returning to her neighborhood as a board member of a fledgling organization, the New West Side Economic Development Group (NEWSED). She also quickly became a NEWSED employee, leasing and managing properties, and today is Executive Director of the $2-million-a-year organization, overseeing the revitalization of West Denver.

Barela is particularly fond of “seeing the physical improvements, as things go from ugly to nice,” she says, knowing that those changes help stimulate the sense of community that leads to more holistic change. Sure enough, the physical and economic revitalization NEWSED has spearheaded on Santa Fe Drive, which cuts through the neighborhood, has helped spark a rebirth of arts and culture in the neighborhood.

Barela sees NEWSED as an “engine for holistic change,” designing and implementing strategies to make life better for neighborhood residents in areas such as housing, jobs, mental health care, and cultural development. 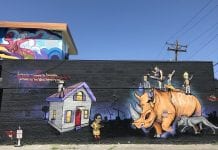 Did the Comprehensive Community Initiatives of the 1990s, early 2000s Bring About Change?