1 POSTS 0 COMMENTS
Quraysh Ali Lansana was born in Enid, Oklahoma and earned his MFA from New York University, where he was a departmental fellow. He is the author of the poetry collections mystic turf (2012), They Shall Run: Harriet Tubman Poems (2004), and Southside Rain (2000); his chapbooks include reluctant minivan (2014), bloodsoil (sooner red) (2009), Greatest Hits: 1995-2005 (2006), and cockroach children: corner poems and street psalms (1995). He has also written a children’s book, The Big World (1999). Lansana has been a literary teaching artist and curriculum developer for over a decade and has led workshops in prisons, public schools, and universities in over 30 states. He is a former faculty member of the Drama Division of The Juilliard School, and served as director of the Gwendolyn Brooks Center for Black Literature and Creative Writing at Chicago State University from 2002-2011, where he was also associate professor of English/Creative Writing. Currently, Lansana is on faculty in the Creative Writing Program of the School of the Art Institute in Chicago and the Red Earth MFA Creative Writing Program at Oklahoma City University. 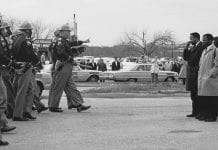 echo: an autobiographical journey of the power of the ballot