1 POSTS 0 COMMENTS
Michael L. Chambers, II, is the Principal and Founder of Humanities in Public (HIP), a company that endeavors to engage both the public and private sector in critical discovery. HIP is rooted in the core values of historical understanding, recognition of the human condition, and the role of cultural influences on the individual experience as well as that of society. HIP works to expand modern thought through the practice of using humanities outside of traditional academia. Since receiving a Bachelor’s degree in African American Studies from the University of Alabama at Birmingham, he has gained over nine years of experience developing and producing humanities programming in Alabama and the Washington DC area. To date, he has worked with the DC Public Library, two State Humanities Councils, and the Birmingham Civil Rights Institute and Museum. Through the development of HIP he has furthered the use of humanities in non-traditional spheres; using it to highlight social determinants of health, inform community discussions on civic issues, and foster a deeper understanding of place and community through the use of film, music, and in-depth panel discussions. In addition, Chambers has used his skills to convene DC thought leaders and citizens on issues ranging from rapid gentrification and its effects on the community to youth centered programming across the city. Chambers takes a specific and multifaceted approach to his work which has led to professional relationships with Forward Solutions, The Interactivity Foundation, 11th Street Bridge Park & Washington Performing Arts. Chambers is honored to serve his community as a member of Washington, D.C.’s commission on African American Affairs and co-chairs its criminal justice committee. 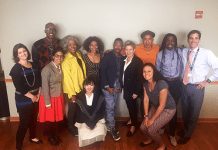 At the Table…and Being Heard

Blog Michael L. Chambers - September 9, 2016
In the fall of 2015, members of the 11th Street Bridge Park project and Washington Performing Arts invited me to participate in an Arts Task...