During Detroit’s bankruptcy in 2013, a new quasi-public regional entity, the Great Lakes Water Authority, took over the city-owned water system. On the surface this seemed like normal procedure for a city in bankruptcy, but a deeper look by UC Berkeley’s Haas Institute revealed that the Detroit Water and Sewerage Department (DWSD) itself was never insolvent.

In fact, the deal that created the new authority has only exacerbated a long-brewing water crisis for the people of Detroit and surrounding counties.

Since its creation in 2017, the Great Lakes Water Authority’s most public action has been steep rate increases on families and businesses, as well as mass shut-offs of water service to Detroiters struggling to pay bills. These actions have generated national criticism and drove Detroit’s public infrastructure further toward the brink in a city where many schools were closed in 2018 due to lead and copper contamination in their water.

Southeast Michigan’s water crisis is emblematic of the disinvestment in physical infrastructure that is plaguing America’s communities. While investment in infrastructure was a popular point of discussion during the 2016 presidential election, nothing has happened yet to reverse the entropy and decay of the century-old water system that serves Michigan’s most populous region.

“The inability of the governance system in our state to provide water security for its most populated region—Detroit and its counties, is symbolic of the long-term governance crisis the whole country is in,” said Ponsella Hardaway, director of MOSES, in an address to nearly 125 church and community leaders at a community water security assembly this past January. “It’s gotten so we cannot rely on our leaders to solve even the most basic of problems. When almost 50,000 people get their water shut off, and when it’s not always safe to drink . . . it just makes you wonder what kind of country we are living in.”

MOSES staff and clergy leaders worked with Dr. john a. powell of the Haas Institute and Dr. Joe Recchie of Praxia Partners to produce Water Equity and Security in Detroit’s Water and Sewer District, a comprehensive study on the Detroit region’s water ills and detailed recommendations to repair them. The study was released at a January 2019 press conference.

Several Detroit-area organizations contributed to the final report, which also acts as a road map for MOSES’ advocacy work over the next 10 years, and is intended to support not only its organizing but the work of other organizations focused on water justice. Russ Bellant, a licensed water plant operator and longtime activist in the city, says, “The report brings to light all the dimensions of the problem that the water department would rather not share.”

According to MOSES, Detroit’s water problems are a part of a slow but ever-worsening American infrastructure collapse. Hundred-year-old systems like Detroit’s, which handles sanitation, drinking, and storm water for four southeastern Michigan counties, are reaching the point of obsolescence at a time when stressors from global climate change worsen. And the region’s communities of color are getting hit first and worst.

“The geography of race determines disinvestment . . . so a system under pressure breaks down in our communities first,” says Dorian Warren, president of Center for Community Change, a D.C.-based hub for community organizing, politics, and policy change that has been working with MOSES.

“Racialized planning and the social divisions that this planning fosters is part of what’s preventing us as a country from addressing the need to reinvest in all kinds of infrastructure projects from water systems like the one that serves Detroit, to communication and electric grids, roads and bridges,” Warren says. “Racist planning saps our collective energy to do this work and that leaves community organizations like MOSES or The People’s Water Board left to invent solutions outside of the systems we set up to govern this infrastructure. In a more just world the water authority and the Detroit mayor would be giving out a medal to the people who conducted this study. Since that hasn’t happened, the report becomes an advocacy road map instead.”

“Detroit doesn’t just need physical fixes,” says report co-author Joseph Recchie. “There is a governance aspect of this as well.” Recchie says the report makes several core recommendations. The Great Lakes Water Authority, which governs water decisions, but leases the infrastructure from the City of Detroit’s system, is simply not paying enough to the Detroit water system to manage the ongoing repair and replacement needed to ensure clean water. “And the idea that this money can be made up on the backs of ratepayers in the city of Detroit—under the threat of water shut-offs—will not fix the problem,” says Recchie.

The report recommends adopting a fair water plan that protects the most vulnerable customers, turning the city’s vacant lots into park-like sponges for storm water (which would both beautify neighborhoods and augment the city’s storm sewers), and centering job development to ensure that Detroiters get the broad benefit of redevelopment.

If adopted, Detroit would be a leader in the shift many thinkers believe society is going to have to make in the near future. “This is exactly the kind of thing that a Green New Deal would support,” says Paul Getsos, coordinator of the People’s Climate Movement. “It’s exactly the kind of thinking we need to get through the environmental bottleneck that global climate change is putting all of us through right now. If a place like Detroit can lead it will encourage other cities to follow. But it’s clear that grassroots leadership is pretty essential to making something like this work. Solutions that include unions and community voices have to be fought for.”

Organizing to make the kind of shifts powell and Recchie recommend is a tall order, and MOSES is rising to the challenge. In 2018, MOSES Action, MOSES’s new sister 501c4 (a designation that allows for political work) organization, registered over 19,000 new voters, 4,000 of whom said water was their No. 1 issue and helped elect both a new governor and lieutenant governor in Michigan, as well as several county commissioner seats in counties that make up the Great Lakes Water Board’s service area.

“People were talking about water a lot during the campaign,” said Patricia Sanders of MOSES Action. “We’d visit house after house and people wanted to know about the shut-offs, and the school closures. It was on everyone’s mind.”

MOSES volunteer leadership has begun distributing the report in churches throughout the region. MOSES staff has also begun organizing in white working-class suburbs that are also feeling the effects of the crumbling water system, holding meetings in homes and churches. It has also disseminated a video explaining the byzantine governance system for water, and is calling for a large water-equity summit later this year where they hope to focus the attention of national leaders on water issues.

The report suggests two futures for Detroit’s water system. In the more hopeful one, there is significant local, state and federal investment in rebuilding both the physical water treatment and delivery systems and in the larger green infrastructure (rebuilding the tree canopy to reduce runoff, for example). In this brighter future, Detroit and its suburbs become an example that other regions can follow. In the other, more dystopian future, there are another 200,000 water shut-offs and the city’s nascent recovery dies for lack of water infrastructure. 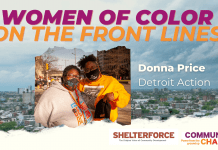