New York’s rent regulation laws, which protect over 1 million renter households in New York City and Westchester, Nassau, and Rockland counties are up for renewal this year. A product of nearly 100 years of advocacy and legislation, rent regulation is critical for low-income New Yorkers: more low-income tenants in New York City live in rent-regulated apartments than in subsidized and public housing combined.

Rent regulation laws mediate the severe power imbalance between tenants and landlords. At their core, the laws protect tenants from sudden rent increases and provide security of tenure by extending the right to a lease renewal.

In New York City, where rent regulation covers nearly half of the rental market, the system has positive neighborhood and citywide impacts.

On the neighborhood level, rent regulation acts as a counterbalance to gentrification and as a bulwark against displacement and homelessness, helping residents stay in their apartments. On a city level, it provides the groundwork for other programs like Right to Counsel and helps promote integration without displacement, an important component of residential desegregation. (Read Community Service Society’s new in-depth guide to rent regulation in New York for more details.)

Over the past 25 years, legislative decisions by the city and state have weakened rent regulation, opening the door to increased tenant harassment and allowing for sudden and permanent rent hikes. In 1994, the New York City Council approved a bill that let landlords deregulate apartments that reached $2,000 in monthly rent. Three years later, New York State adopted a similar policy and further weakened the framework by introducing the “vacancy bonus,” which allows landlords to increase rents by approximately 20 percent when a new tenant rents a stabilized apartment.

In 2003, the state legislature made preferential rents (rents below the allowable maximum) temporary and revocable during a resident’s tenancy, thus allowing landlords to bypass annual rent increase guidelines in apartments that have rented at below maximum. Combined with Major Capital Improvements (MCIs) and Individual Apartment Improvements (IAIs)—which allow landlords to increase rents above annual rent guidelines to incentivize building-level and apartment-level improvements—these loopholes incentivize harassment and undermine neighborhood-level stability, especially in gentrifying areas.

For example, a 2015 sales brochure for Savoy Park, a large, rent-stabilized complex in Harlem, describes a “proven value enhancement plan” for the property, which has “increased effective gross income at the Property by approximately 23.8% since acquisition” through strategic deployment of major capital improvements and individual apartment improvements. While the Savoy Park brochure only makes mention of value increases during “normal apartment turnover,” harassment-as-investment-strategy is well documented in rent-regulated buildings.

New York City has lost 291,000 rent-regulated apartments since 1994. The decline of rent regulation is occurring within the context of a broader affordability crisis, including the loss of subsidized housing and rapid increases in unregulated rents, dramatically shrinking the city’s supply of housing affordable to low-income households.

In 2019, there is progressive momentum to both eliminate the rent law loopholes that lead to the loss of regulated units and also to expand tenant protections to a broader constituency. A number of state level legislative candidates successfully ran in 2018 on pro-tenant platforms, explicitly focusing on expanding renter protections. Further, everyday New Yorkers understand the importance of rent regulation, whether or not they benefit from it directly. In addition to regulated tenants, the overwhelming majority of homeowners, public housing residents, and subsidized and unregulated tenants support strengthening the rent laws. [See also: “What the Fight for Universal Rent Control in New York Can Learn from Prop 10’s Defeat in California.”]

Drawing on this momentum, the Upstate-Downstate Housing Alliance, which brings together tenants from across New York State, has launched the Housing Justice for All campaign aimed at both strengthening the rent laws and expanding protections to renters not currently covered—those who live in small buildings and in cities in New York State that do not now benefit from rent regulation. 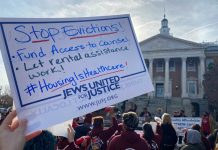