One blessing of my job as CEO of the Institute of Cultural Affairs (ICA) is being able to tap into the wealth of human spirit and the wisdom of our “Living Archives,” whose aim is to share their experiences and tools from the 20th century peoples’ movement for social justice and human development with today’s citizen activists, civic leaders, thinkers, and students. Over the week of Oct. 9, 50 of these former ICA colleagues and current volunteers convened to commemorate the 40th anniversary of what we have dubbed the “Band of 24”.

Launched in the early 1970s, human development projects were participatory, community-building initiatives and coordinated regional development, and by 1977 were in locations across every one of the world’s “24” time zones. I categorize the Band of 24 as a non-governmental Peace Corps that aimed to empower communities via motivating its residents, releasing their creativity, and building leadership skills to facilitate comprehensive change.

Each of the projects began with a week-long consultation during which residents and volunteer consultants from around the world shared their expertise in building a plan to meet the community’s needs.

Initial consultations with the community elicited a picture of its hopes and dreams for the future. Second, the major factors blocking this vision were identified so that practical proposals and specific tactics unique to each community could be created by residents in order to implement their plan for comprehensive socio-economic development.

Convening at ICA-USA’s headquarters in Chicago, participants shared stories, reflected on lessons learned and challenges addressed, stopping to remember those no longer present to share.

Jean Long, now ICA’s resident archives volunteer, went to the village of Maliwada in India in 1976. “ICA had built a training school there where 10 people from each new village we engaged would come to be trained in programs such as preschool, healthcare, agricultural improvement, small business start-up, and others. As a part of Maliwada’s strategic plan, we had village workdays to rebuild the seven bunds (small dams) which had held the monsoon rains and raised the water table around the village,” she recalled.

When Long went back to visit Maliwada in 2006, there was a large forest where the village should have been. “I had the taxi turn into a small lane that went into the forest, and there was the village—brick houses with brick streets and drains. They had planted hundreds of trees to turn the desert in and around their village into a cool and shady forest. The village had truly taken charge of their future,” said Long.

Mary Laura Jones supervises Library Science graduate students from Dominican University interning in ICA’s Global archives and reflected on her experiences from her and her family’s assignment to Area Suva in the South Pacific from 1979 to 1983. “We lived in Western Samoa, the Kingdom of Tonga and visited the Marshall Islands, Fiji, New Guinea, French Polynesia, Nauru and New Zealand.” ICA trained over 600 young island leaders in 4 nations over 10 years. The Marshall Islands Human Development Project on Majuro was initiated in 1975 with a planning consult including 38 volunteer experts in business and community development, food production, education, and mechanics.

Former ICA board chair Doug Druckenmiller reminded us of the intergenerational perseverance required when he told the story of Frank Brave Bull, one of the key supporters of ICA’s Human Development Project in Inyan Wakagapi, in Cannonball, North Dakota. On Oct. 3, 2016, his daughter Ladonna Bravebull Allard testified before the United Nations urging it to halt the Dakota Access Pipeline as the Standing Rock Sioux strive to protect their sacred waters and land.

Personally, I am thankful for their service and commitment to social justice. Their work 40 years ago remains extremely relevant for today’s challenging times, reminding us that we must embrace the value of community-led development if we are ever to attain a just and equitable society.

A report on the sojourn week can be found here. 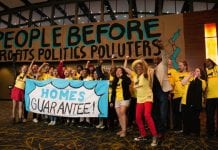 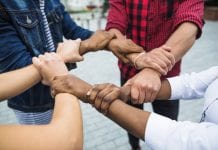 Let’s Get Explicit: Social Justice in Asset Based Community Development