Many of us think that any employment, even part time, provides a measure of security. This is not the case for the millions of low-wage workers who are subject to unstable work schedules. In an effort to minimize labor costs (and with an egregious fixation with statistical models), businesses are hiring part time and using scheduling software that attempts to dynamically match labor hours with demand. This practice, known as ‘just-in-time’ work scheduling, shifts business risk to some of the most vulnerable workers and has serious consequences for families.

Store managers say that they prefer to hire workers with open availability, so employment is essentially contingent on open availability with no minimum guarantee of hours. Applicants are compelled to conceal outside commitments, including caregiver duties and their own medical needs. Workers who desperately need more hours are unable take a second job, since anything less than full availability is responded to punitively with reduced shifts. Workers are sometimes sent home early or without clocking in at all.

Unpredictable schedules means workers are unable to improve their future earnings through school or training. Over the long term, career trajectories are negatively affected because part-time workers receive lower hourly wages, less training, and fewer opportunities for job promotion. This structural barrier to economic mobility has the potential to create a permanent underclass of worker.

Volatile work schedules also mean volatile incomes, and added uncertainty in daily life. “The amount of hours and days I work changes on a weekly basis so I never know how much my check will be,” a worker testifying for the Fair Workweek Initiative explains. “That means I don’t know how much I can contribute to rent and bills, how much food I can buy for my daughter, or whether I can even afford to do laundry that week.”

Last fall, The Center for Law and Social Policy (CLASP) presented an audio conference to discuss updates to the social safety net to better accommodate volatile work schedules. During the conference, Jessica Webster from the Legal Services Advocacy Project in Minnesota related a story about a mother of one-year-old twins who was working as a security guard while receiving TANF. An unexpected drop in work hours caused interruption in her subsidized childcare, resulting in job loss and homelessness.

Called the “next new human right” by American Prospect, the issue of fair work schedules has gained a lot of traction over the past year. In 2014, a federal bill to address abusive scheduling practices died in committee and was reintroduced by Senator Warren in 2015 with substantially more sponsors. Advocates are not waiting for action from Capitol Hill, however. In 2014, the San Francisco Board of Supervisors passed the Retail Workers Bill of Rights, the first sweeping reforms addressing on-demand scheduling and part-time work in the country. In 2015, several jurisdictions introduced legislation designed specifically to address fair work scheduling.

The Center for Law and Social Policy (CLASP) maintains a repository for information pertaining to unstable work schedules and the University of Chicago hosts the Employment Instability, Family Wellbeing, and Social Policy Network (EINet), a group of academics and policymakers who are working to address these issues. The National Women’s Law Center has presented testimony to congress and compiled fact sheets that spell out legal provisions as well as the effects on female-headed households.

Perhaps as a result of increased media coverage, some retailers announced an end to on-call shifts, with mixed results. In December, Kronos, one of the largest software developers in the work scheduling space, announced a partnership with the Center for Popular Democracy to build in features that take worker preference into account. Even more encouraging, some business leaders and academics are questioning whether minimizing labor costs is actually beneficial to the bottom line. Researchers at the Center for WorkLife Law assert that it is possible to improve scheduling efficiency, while considering the needs of workers.

What Community Groups Can Do
While the fight for a fair work week continues, it is likely that many constituents of community organizations are facing this kind of uncertainty with both schedule and income. This may impede the work of community groups in many ways, from making it more complicated to determine appropriate affordable rent based on income to making it harder for residents to regularly show up for trainings, appointments, or organizing meetings.
Some of CLASP’s recommendations for adapting social service agencies to this new work environment can apply to community organizations as well. They include:

Community-based organizations might also consider taking on an advocacy role with public agencies. When it comes to public benefits, just-in-time scheduling creates an irony that borders on the absurd: while unstable work hours compel many families to rely on public benefits, this same volatility often prevents access to those benefits. A small, temporary increase in income or decrease in work hours can trigger automatic sanctions or program disqualification.

Though under federal funding, accommodations would be allowed under the sorts of circumstances just-in-time scheduling creates, Webster noted that state agencies often fail to exercise this discretion, and clients and administrators alike are often not aware it is possible. State and local agencies can and should realign their processes to address this. But there is also an opportunity for those outside of public agencies to make a difference by organizing to inform recipients of their benefits rights. These efforts would save money by reducing “churn” (i.e., people kicked off benefits only to be put back on them again), improve outcomes for recipients, and remove disincentives to work. CLASP notes that these ideas have broad political support, which could be encouraging news for enterprising community practitioners who would like to develop a role in this area.

Fundamentally, we need to advance legal and cultural recognition that, especially for those who are resource-constrained, time is tremendously valuable, and that human needs are not nearly as scalable as mathematical models imply. 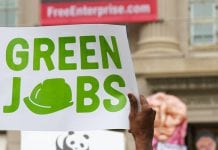 More Than Marching: Creating Good Jobs That Protect Our Water And Air

How One City Is Keeping Jobs Local Using Co-ops