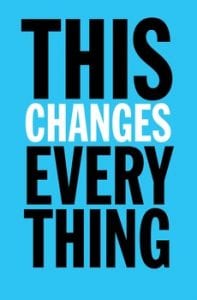 “Because the thing about a crisis this big, this all-encompassing, is that it changes everything. It changes what we can do, what we can hope for, what we can demand from ourselves and our leaders.” – Naomi Klein

Forget about blue states and red states or Democrats versus Republicans. There is only one distinction to be made going forward: Do you support an “extractivist” or “regenerative” energy policy? You can’t equivocate. There’s no time.

In her book, This Changes Everything: Capitalism vs. The Climate, Naomi Klein has made the convincing argument that we have now reached “Decade Zero” of the climate crisis. Planet Earth cannot endure temperatures rising more than two degrees Celsius as a result of further carbon emissions. The door to reach two degrees is closing—not in the next decade, but in 2017 it will be closed forever with no room for any additional increase in emissions.

“In short, it means changing everything about how we think about the economy,” Klein underscores, “so that our pollution doesn’t change everything about our physical world.” Klein challenges us to live “nonextractively” by relying overwhelmingly on resources that can be continuously regenerated. Renewable energy is a prime alternative, yet governments throughout the world continue to subsidize fossil fuels directly or indirectly as oil and utility companies play lip service to investing in it.

Klein acknowledges that “living nonextractively does not mean that extraction does not happen … .” But she believes that it does require an end to mankind’s habit of “taking without caretaking.” She cites examples like getting our food from farming methods that protect soil fertility, and retrieving metals from recycled and reused sources. Putting on my community development hat, I would add rebuilding neglected communities for people in need of affordable housing, and creating jobs from the renewal of the plethora of vacant homes and land born of the foreclosures crisis. Wealth was extracted from these communities, and they will require care to be regenerated, as well.

In his Nov. 9, 2014 review for The New York Times, Rob Nixon noted this “is a book of such ambition and consequence that it will be almost unreviewable.” He concludes that it is “the most momentous and contentious environmental book since Silent Spring. Personally, I think it is the most significant political analysis and call to action that I have ever read, and I’m figuring could take several passes on my part to convey the depth and breadth of Klein’s reporting.

Without commenting on the 114th Congress, I will note that Sen. Jim Inhofe (R-Okla.), chairman of the Senate Committee on Environment and Public Works, threw a snowball on the senate floor February 26th to disprove what he sees as alarmist conclusions about man-made climate change. While such a performance would make a great Saturday Night Live skit, we can no longer afford to laugh at such pitiful leadership on an issue of dire importance.

Klein walks us through several climate change battlegrounds. Most timely is the Keystone XL Pipeline. Last month, President Obama vetoed legislation that would have authorized its construction, enabling him to retain ultimate control of the decision. The extractivist industry has been pushing this pipeline because the Alberta tar sands will be producing more high-carbon oil than current capacity can handle. The Keystone XL Pipeline is not an American jobs bill but—to the detriment of our planet’s health—is about corporate profit. Whatever the real number of construction jobs it may create, more jobs would be generated by rebuilding our country’s bridges and expanding public transit.

Klein reminds us that it is clear how much carbon can be burned while keeping global warming below 2 degrees Celsius. Yet the extractivist industry wants to burn five times more fossil fuel than our planet can absorb. If we are serious about protecting Earth’s future, approximately 80 percent of those reserves would be “useless, stranded assets.”

Fracking is another fight going on state by state. Klein cites Cornell University’s game-changing study that says fracked gas has a “greater greenhouse gas impact than oil and may well have as much of a warming impact as coal when the two energy sources are examined over an extended life cycle.” New York State’s ban trumps Illinois’ current gridlock over regulations.

In chapter eight, titled “Dimming the Sun,” Klein explains the latest in geoengineering, which assumes political inaction will condemn us to a future of global warming that will then require spraying aerosols into the atmosphere. A report released in February by the National Research Council called for more research into reversing climate change through such a process, called albedo modification. A subhead in this chapter asks: “What Could Possibly Go Wrong?” So what if we lose blue skies, we’ll have redder sunsets.

In chapter nine, titled “Blockadia,” Klein introduces climate warriors—from indigenous Canadian tribes to activists in Nigeria, Ecuador, and Greece, whose common demand is: “Stop Digging.” The term was coined in August 2012 by the direct-action group Tar Sands Blockade during an 86-day blockade challenging Keystone’s construction in East Texas. “Fighting a giant extractive industry on your own can seem impossible,” Klein observes, “but being part of a continent-wide, even global, movement that has the industry surrounded is a very different story.”

Klein is a board director of 350.org, which launched the fossil fuel divestment movement. She accentuates “Don’t Just Divest, Reinvest,” and pushes smart reinvestment strategies that can provide alternatives to communities at the front lines of extraction. She cites a May 2014 article in Common Dreams, titled “Where Should the Divestors Invest?” which promotes community investment funds, co-ops, and social enterprises, and supports her argument with a 2012 Canadian Centre for Policy Alternatives study that says green investment, “could create thirty-four times more jobs than just building another pipeline.”

I believe affordable housing developers and community planners should consider this to be about more than saving dollars from energy efficiency and mitigating traffic with transit-oriented development. This is about engaging our constituents and coalescing in a global movement to take action on climate change, which threatens our communities with devastating storms and life-threatening temperatures—and in doing so, creating a regenerative economy.

“Real solutions to the climate crisis are also our best hope of building a much more stable and equitable economic system,” Klein states. “If there has ever been a moment to advance a plan to heal the planet that also heals our broken economies and our shattered communities, this is it.”

If there has ever been a book to read, this is it.

This Changes Everything: Capitalism vs. The Climate was published by Simon & Schuster in 2014. It is available for sale through Powell’s Books here.