The CDC model was developed out of necessity when advocacy groups realized that they had to do the hard work of restoring their communities themselves because the public sector and private market had failed them. In the 1960s and ’70s, urban neighborhoods across the country convinced the federal government and philanthropic community to give money directly to community-led organizations to solve their own problems.

Such partnerships to rebuild America’s inner cities were not without precedent, but the CDC model was. Instead of relying on the protest techniques of community organizing or a social welfare model of neighborhood improvement, CDCs decided to work within the capitalist economy to generate assets within poor communities. CDC partners and funders had high expectations that where others had failed, CDCs would succeed.

Almost 50 years later, CDCs have come of age, but not everyone is convinced that this model of neighborhood revitalization still works or ever did. Has the CDC model run its course, or have its friends simply lost faith?

Over the past 15 years, I have worked at the grassroots for CDCs and researched them academically. In both roles, I have interacted with government officials, private financial institutions, and financial intermediaries responsible for funding CDCs and their projects, and private developers who partner with or complement CDC work. At various times, I have observed all of these partners together in the same room, as well as talked with them individually and confidentially. Through all of this, it has become clear that where once there was faith in the CDC model, there is now skepticism. Understanding why this has happened and how to reverse this trend is critical to restoring faith among a new generation of CDC partners and practitioners.

In the 1960s, the federal government was convinced that community-driven local economic development through CDCs was the solution to urban blight and local economic decline. Starting with the Special Impact Program within the Office of Economic Opportunity, it sent a steady stream of funding to CDCs for economic development equaling around $35 million annually through the late ’70s. During this time, CDCs’ primary focuses were developing commercial, retail, and industrial space, financing business development, and creating new community-owned businesses. Eventually, as the funding slowed to a trickle in the 1980s, CDCs shifted their emphasis to housing rehabilitation and construction, which has remained their primary work since then.

Philanthropy also believed in the viability of a nonprofit, community-based solution to urban neighborhood distress. The Ford Foundation was an early and generous supporter, contributing almost as much as the federal government by the mid-‘70s. As philanthropic interest and the number of CDCs seeking support grew, several foundations formed national intermediary organizations in the early ’80s. These intermediaries provide a different sort of money than government programs: instead of being tied to specific projects, it often supports a CDC’s overall operations and project portfolio. They also work through local offices and often support an entire city’s CDC community, providing training and technical assistance. (See Alexander von Hoffman’s article in this issue for more history.)

Naturally, CDC partners wanted some assurance that their funding to CDCs was yielding results within the community. Periodic CDC studies and surveys began to report on housing units constructed, jobs created and preserved, and commercial, retail, and industrial square footage built. These studies revealed some promising statistics. With the help of a variety of set-asides and preferences for nonprofits within government housing programs, CDCs performed well in housing outputs. They increased the pace of development from 62,000 units per year between 1994 and 1998 to over 96,000 units per year between 2005 and 2007. Between 1988 and 2007, they developed over 1.6 million total units, representing over one-third of government or nonprofit owned housing in the country.

There was growing concern, however, that housing was not enough to reverse the fortunes of urban neighborhoods and residents, especially as the concentration and isolation of poor households in urban neighborhoods continued to grow during the ’80s. Near the end of that decade, comprehensive community initiatives were launched by foundations to reconnect the CDC model of community development with larger social welfare concerns in hopes that the complementary approaches could work together for greater community change. These complex collaboratives worked together to empower communities to plan and implement their own vision for the future. However, evaluations revealed ongoing tensions: between partners, with residents, and the time needed to build relationships and implement community change versus the short funding timeframes and high expectations for results.

At the same time, philanthropic partners wanted to know whether their specific support and training for CDCs was indeed equipping them to do their jobs well. They sponsored research that identified a holistic model of at least five capacities necessary for CDC success — organizational, financial, program, network, and political. Using this model, various studies found that CDCs performed well in specific program areas (like housing), but faced interrelated challenges in maintaining good leaders and securing necessary funding, as well as inadequacies in improving the ability of CDCs to negotiate local politics and network effectively.

The change was gradual, but noticeable. Frustrated by lackluster findings, partners could not understand why their efforts were not enough to enable CDCs to perform the miracles expected of them: complete community transformation in the face of incredible social and economic odds. When a wave of CDCs actually shuttered their doors, some partners assumed the worst: CDCs were no longer, or had never been, efficient and effective community developers. They apparently were mismanaged, took on projects too large and too diverse, or lost their community roots. Others, however, took note of the general dearth of training on organizational capacity and general funding for basic CDC operations, as well as the challenges of politics and weak network capacities. Yet the damage had been done, and some friends of the CDC model were quick to diminish their support, attach stronger conditions on performance, or abandon it all together. In addition to the disappointments around results, here are other major reasons why CDC friends have lost faith, based upon my observations and interactions over the years with the key partners:

Government officials are even more shocked when CDCs lobby for flexible funds to cover their operations beyond funding with strings attached to cover a single project. One study of the nonprofit housing industry in Erie County, N.Y., found that when local government felt positive about their local nonprofit housing providers they were happy to fund them at higher levels. However, when the nonprofits actually asked for the funding, they were given less. These are the same CDCs that are often expected to donate the developer’s fee rightfully earned from developing a housing project back to the project to make it financially feasible. And what about those organizations that do not build, sell, or manage housing as a means of earning some revenues? That is why so many have no choice but to do housing. Philanthropy still provides some flexible operating support, but is putting less money into CDCs today than the government.

My challenge to friends of CDCs is to stop being lukewarm about a system that we ourselves created: either support the model or propose a better alternative.

Alternatives to CDCs have been tried and failed. Local governments are guilty of concentrating poverty, and many still fail to maintain services and infrastructure in poor communities at the same rate that they do in wealthier ones. Similarly, private real estate interests, developers, and financiers continue their legacy of discrimination and disinvestment in our urban neighborhoods. How quickly we forget.

There is one alternative better than the existing CDC model: CDCs that have the public trust and comprehensive funding to tackle the toughest job in community development. Let’s have a little more faith in our friends. 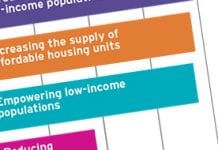 What Is Community Development?