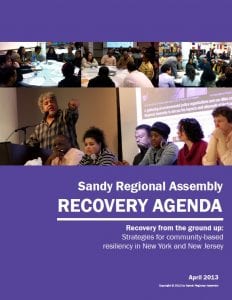 An interesting new planning document by the Sandy Regional Assembly was just released by a cross-section of grassroots groups, most based in New York City, on how to prevent the next big hurricane that rumbles up the East Coast from inflicting catastrophic harm on the city and its environs.

The document is striking in that it is a plan to deal with natural disaster that is written from the bottom up, rather than the top down. Most hazard mitigation plans, at least that I have seen, are written by government planners with only a small amount of real community participation. I don’t mean to fault planners for this – it’s simply that hazard mitigation isn’t something that communities normally get riled up over. Disasters are rare enough, compared to everyday crises like the lack of affordable housing. But of course Hurricane Sandy was far from an ordinary storm event – it was a game changer for many communities.

The plan is also interesting in that it emphasizes how Hurricane Sandy had a disproportionate impact on low-income communities and communities of color. This was in part, the authors say, because these populations made up a significant share of the people in the low-lying areas near the coast and along inland waterways. I don’t remember much media coverage that looked at the impact of the storm in this way.

It seems to me that in most cases, low-income communities are hit harder by natural disasters regardless of where their homes happen to sit. Tornadoes, hurricanes, and winter storms do not discriminate in the path they take, but people’s resources often dictate how well they fare during the event and after the weather passes. You often see images of devastated trailer parks after a tornado touches down in the South. Not only are trailer park residents living in some of the most vulnerable housing, but after the storm there is often no other housing in the area they can afford. After a late-winter storm a few weeks ago knocked out power to many people in Central Virginia for close to a week, it was the people who didn’t have wood heat or generators who were in the biggest trouble.

Hazard mitigation planning doesn’t necessarily focus on the needs of the most vulnerable residents. The plans I have seen are written with the needs of the entire jurisdiction in mind. Not that there is anything wrong with this. Goals may include, for example, making sure emergency shelters are well-stocked with flashlights and other critical supplies, and ensuring that there are plans in place to coordinate the response of various governmental agencies.

These plans help government respond well to disaster, but they do not tend to engage the citizenry in planning how they will take care of themselves and their neighbors. The sociologist Eric Klinenberg has written a great deal on how social networks can make a difference in whether vulnerable people survive a heat wave or a hurricane. The just-released Sandy recovery plan is refreshing in its emphasis on the need for community participation in emergency planning, out of which can come increased social cohesiveness.