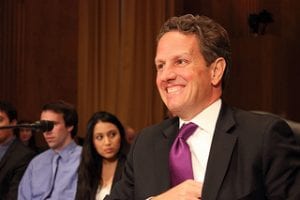 Yesterday, Treasury Secretary Timothy Geithner took a bold step toward guarding families’ homes from unnecessary foreclosure. He wrote an open letter in defense of principal reductions—a vital option that reduces the original amount of a home loan for struggling homeowners. Last summer, partners of the Home for Good campaign called on Secretary Geithner to make lasting improvements to the mortgage market.  More than 10,000 concerned individuals sent postcards, and during a four-day call-to-action, nearly 400 people called the Treasury to urge a simple message:  stop needless foreclosures; support affordable rental housing; and revive a sustainable path to homeownership.  With his open letter, Secretary Geithner made a strong move in the right direction.

In an environment where the blame game is often the operative strategy for elected officials and housing stakeholders, there appears to be little that economists, advocates, big banks, and investors agree on.  However, principal reduction is a solution that has cut across ideology and is considered by many to be a win-win solution. At minimum, it is an evidence-based tool for reducing foreclosures that continues to be underused, even while so many other approaches come up short. Smart servicers and lenders are on board.  They use a calculation known as Net Present Value (NPV) to compare the costs associated with foreclosure to the costs of reducing principal.  As analysis released by the Treasury Department shows, there is a targeted group of loans on which investors can save money in the long run by cutting a troubled homeowner’s mortgage balance to a manageable level.

Unfortunately, Federal Housing Finance Agency (FHFA) Acting Director Ed DeMarco has time and again stood in the way of implementing principal reductions as a solution.  DeMarco is in charge of regulating Fannie Mae and Freddie Mac, where most of the nation’s home loans are held—and until he concedes, many families will continue to fall into needless foreclosure.  In his open letter, Geithner points out that a recent study by DeMarco’s own agency shows that principal reduction decreases the chances of redefault and actually saves money, rather than increasing risk and cost, as DeMarco claims.  Making the situation all the more frustrating, we—the taxpayers—are the investors in the case of loans serviced by Fannie Mae and Freddie Mac.  DeMarco does us all a disservice by rejecting a key tool that could reduce foreclosures while also saving money for taxpayers.

Geithner’s public statement in support of principal reduction is cause for celebration, but DeMarco has further entrenched himself as the major obstacle to taking principal reduction to scale.  The enduring housing crisis requires bold steps and true solutions.  We cannot afford to be impeded by purely ideological differences—five years of that experiment have cost millions of families their homes and neighborhoods.  Principal reduction is a proven and refreshing strategy for repairing the system, and DeMarco must no longer stand in the way.

Ready to see real solutions to our nation’s housing woes? Join the Home for Good campaign and tell the presidential candidates that you want their commitment to housing opportunities!

Photo by Medill DC, CC BY