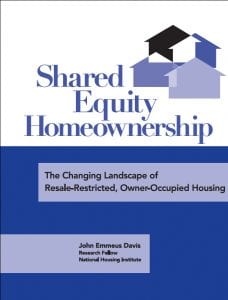 As the housing crisis worsens, putting the American Dream out of reach for millions, communities around the country are turning to shared equity homeownership—limited equity co-ops, community land trusts, and inclusionary units—to redefine the housing ladder. This breakthrough study examines the benefits of these models within a sectoral framework; a third sector housing strategy. Support for Shared Equity Homeownership was provided by the Ford and Surdna foundations.

The most distinctive feature of affordable housing policy in the United States in recent years has been its unrelenting focus on promoting homeownership as a social good, and on increasing the ranks of homeowners among the nation’s lower-income households. To this end, a variety of strategies have been employed, including capital subsidies, down payment and closing cost assistance, and an ever-increasing array of creative mortgage instruments, offering adjustable rates, lower down payments, longer terms, balloons and other mechanisms that increase immediate access to housing at the price of future risk and uncertainty.

Perhaps as a result of these efforts, although unusually low-interest rates and generally low unemployment rates have also played their part, homeownership rates have inched upward. By 2004, 69 percent of American households owned their own home, up from 64 percent in 1985. At the same time, particularly for lower income households and people of color, the downside of this strategy is becoming more and more apparent. Foreclosures are rising in many parts of the nation and, as recent research has shown, a disproportionately large share of lower-income homeowners lose their homes, finding themselves back in the rental market a few years later.

While conventional homeownership may be a mixed blessing for many lower-income households, the impact of these policies on their neighborhoods remains unclear. While neighborhoods benefit from the presence of stable, long-term homeowners, policies that create more transitory homeownership, while increasing the risk of foreclosures and abandonment, may end up destabilizing neighborhoods, doing them far more harm than good. In other cases, where house prices are rapidly appreciating, publicly subsidized homeownership can lead to windfalls for a few, while other less fortunate lower-income households are being pushed out of their own communities.

While shared equity homeownership makes up only a modest share of all owner-occupied housing in the United States, it is a growing share. Well over one hundred community land trusts exist across the country, from Burlington, Vermont, to Santa Fe, New Mexico. Limited-equity cooperatives, although predominantly an urban housing type, have become a more widely-used vehicle for building stable homeownership and preserving affordability in mobile home parks from New Hampshire to California. With the dramatic growth in inclusionary housing during the past decade, tens of thousands of shared equity condominium units have been created across the country, in settings that range from cities such as Stamford and Boulder to the suburbs of Chicago and New York’s Hudson River Valley.

The concept of shared equity, restricting the home value appreciation that flows to the homeowner on resale, can be controversial. Some economic fundamentalists object to any limitation on appreciation as an infringement of private property rights, while others see it as hindering the ability of lower-income households to build wealth, a goal that is certainly a legitimate one. These are not frivolous concerns. It is important to remember, however, that these homeownership opportunities were created as a result of public subsidy or other public intervention, as in the case of an inclusionary unit. Sharing the equity is a reasonable quid pro quo, in light of the considerable shelter value that the homebuyer has gained as a result of the public subsidy or intervention, and the public policy value of preserving affordable housing for future generations.

Homeowners in shared equity models do build equity. In most shared equity models, they receive a return keyed to the consumer price index or the increase in household incomes. While this is far less than some homeowners may gain in rapidly appreciating markets, it is a fallacy to assume that rapid house price appreciation is either normal or inevitable. It has only been in the past decade that people have started to assume that appreciation well above increases in consumer prices, in general, could be counted on, an assumption wildly at odds with longer-term historic trends. In the long run, owners of shared equity housing do well, particularly in light of their modest initial equity stake; moreover, they are far better protected against downturns in the market than conventional homeowners. Such evidence as is available shows that shared equity owners are not locked into those units, but in fact do move up to the private market, combining home equity with gains from education, training, and upward workforce mobility.

For over three decades, the National Housing Institute has sought and encouraged innovative solutions to the housing crisis in America, a crisis that is affecting increasingly greater numbers of people as wealth inequality grows, wages stagnate and housing costs spiral. We are hopeful that this volume will generate further interest and help promote a national conversation that will lead to a robust third sector housing policy.