After three years as serving as the vice president for the National Community Reinvestment Coalition, board member Woody Widrow has decided to move on. In the interim, he is working as a consultant. He is now working with the National Low Income Housing Coalition and the National Congress for Community Economic Development. Woody is writing and editing a national briefing book titled, “Federal Policy in Transition” on housing, economic, and community development. The materials will be used in conjunction with a seven-city road show in June and July teaching housing and community development practitioners about what’s happening in Washington.

Patrick Morrissy, NHI board member and director of HANDS, Inc., a NJ-based CDC, which is working with a number of groups to develop an inner-city modular housing factory, recently attended the Newark Community Development Network’s public exposition at Newark City Hall. The exposition showcases the accomplishments of Newark’s CDCs. Two of the Network’s leaders, Olivette Simmons Simpson and Gerald Bishop view a project highlighted at the exposition. 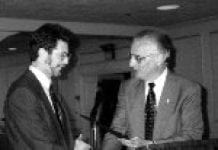