Orness Plaza is one of the only public housing developments geared toward seniors and the disabled in Mankato, Minn., the state’s fourth largest city. Although the city boasts significant economic growth and a relatively low cost of living, it has a low household median income compared to the rest of the state, more than a quarter of its residents live below the poverty line, and its housing costs have been rising.

Orness Plaza was built in the 1970s, and over the years, a lack of funding for adequate maintenance caused the complex to deteriorate significantly: it had mold, poor ventilation, and numerous other problems that potentially affected residents’ health. In 2010, the Mankato Economic Development Authority (EDA) began a major renovation that turned the drab, nondescript public housing complex into a healthy senior oasis.

The renovation employed Enterprise Green Communities (EGC) and Leadership in Energy and Environmental Design (LEED) criteria. While all “green” construction rating systems require environmentally responsible and resource-efficient construction practices, EGC requires several health-related specifications and LEED provides optional points for health-related items. The renovation not only improved the complex’s energy efficiency, it improved the building’s indoor air quality, and it added amenities such as a fitness room, walking paths, and greater opportunities to engage with other residents. Today, Orness Plaza is a symbol of what can be done to build healthy homes for low-income seniors.

In 2010, the National Center for Healthy Housing (NCHH), with funding from the U.S. Department of Housing and Urban Development, began studying health outcomes for low-income senior residents of healthy, green housing renovations.

The Green Rehabilitation of Elderly Apartment Treatments (GREAT) study had three major components: a review of existing research on housing renovations and improvements for seniors, an on-site study of seniors living in a housing complex undergoing green renovation, and interviews with architects and developers of senior housing to determine what, if any, interventions they employ to specifically address senior health-related issues.

The literature review found little existing research on the influence of green housing on senior health. Most studies evaluating senior housing tended to focus on physical safety issues such as fall prevention. The on-site study focused on the effect green renovations had on residents at Orness Plaza. NCHH reviewed not only physical safety elements, but also the effect of the green building elements on the physical and mental health of residents.

NCHH used a health survey adapted from the Medicare Health Outcomes Survey (HOS) to interview the Orness Plaza residents prior to renovation. At baseline and one year post-renovation, 40 people, 22 of whom were 65 years or older, were interviewed. NCHH asked questions about the residents’ physical, mental, and emotional health, presence of any chronic medical conditions, and their daily activities. NCHH compared the survey results to a group of similar Minnesotans.

Although it is reasonable to expect seniors’ health to decline over time, NCHH hoped that due to building practices used in the renovation, the health of the Orness residents would show less decline than the comparison group. And indeed they found that the mental health of Orness Plaza residents of all ages improved significantly more than that of the HOS comparison group, and there was a significant reduction in reported falls.

The interviews NCHH conducted with architects and developers covered senior housing construction or renovation ranging from private homes to assisted living facilities, but did not include nursing homes. Half the organizations interviewed were nonprofits, and all but one developer focused exclusively on affordable housing. Interview questions focused on interventions to address health and safety issues, particularly those related to injury and fall prevention and respiratory ailments; use of universal design; and costs related to senior-specific interventions. NCHH also reviewed trends cited by Senior Housing News and design and building guidelines from organizations such as the National Association of Home Builder 50+ Council and the AIA Design for Aging.

Many developers and architects are using innovative design practices and programs to create healthier, safer places for seniors to live. All the organizations interviewed said they included grab bars and handrails to reduce the potential of falls, but the level of other physical modifications varied.

Nearly all the developers interviewed employ the following practices or modifications in senior housing:

Green building has become nearly as ubiquitous as grab bars in publicly funded senior housing developments. In some cases, funding sources require it; in others, developers include green standards of their own volition, recognizing the economic and health benefits that accrue to residents and the project itself. Although none of the organizations interviewed consciously considered practices to address respiratory ailments, many employed green building standards related to indoor air quality. Measures that reduced or eliminated materials with volatile organic compounds (VOCs), formaldehyde, or other contaminants and enhanced fresh air exchange and ventilation improved indoor air quality and reduced seniors’ exposure to pollution and airborne toxins. Such standards also improve home comfort and energy efficiency.

As developers become more aware of the impact the home has on the health and well-being of seniors, many are expanding the scope of on-site services in addition to physical modifications. Amenities and services ranging from nursing and wellness centers to hair salons—typically only found in upscale, market-rate senior housing—have migrated to affordable senior housing.

Recognizing that no amount of grab bars and handrails can minimize risk factors caused by lack of exercise and physical activity, more developers are including fitness facilities and programs. Promoting exercise helps reduce falls and prevent injuries, as well as improves mental health and overall quality of life. Even in renovation projects where space is at a premium, areas are being converted to encourage residents to stay mobile and active.

Developers are also making a concerted effort to encourage social engagement. Libraries, lobbies with seating, computer labs, and game rooms promote resident interaction. Outdoor spaces featuring picnic areas, gazebos, and gardens encourage residents to leave the confines of the indoors and engage in social activities. One developer mentioned that, as a result of increased gathering spaces, people were socializing more … and “gossiping” less.

Features on and around the outside of senior housing are also becoming increasingly important. Doorway overhangs and porches are commonly installed to help minimize weather exposure, be it rain or snow or too much sun. Exterior walkways, many leading to destinations in the surrounding community, are becoming more common.

Universal Design Is Not Yet Universal

Although many developers interviewed by NCHH indicated they employ universal design, several believed that creating the required number of accessible units mandated by the Americans with Disabilities Act (ADA) meant they were incorporating universal design.
The differences between “accessible” and “universal” design are subtle, but important. The Center for Universal Design (CUD) at North Carolina State University ,differentiates between “accessible” and “universal” design in the following manner:

Accessible: A design process that specifically considers the needs of people with limited abilities and/or disabilities. An “accessible” dwelling unit must meet approved standards or requirements prescribed by the ADA or HUD Section 508 codes. Accessible design features are often permanently fixed in place, and include items such as wider doors, turning space for wheelchairs, bathroom grab bars, knee space under sinks and counters, lever and loop handles on doors and cabinetry, and entrances free of stairs. Accessibility building code requirements vary from state to state (and even locally), and are imbedded in fair housing regulations. Nearly every state requires a set ratio of accessible units in subsidized housing developments.

Universal: A design process that includes elements within the dwelling unit that are usable by people at almost any age regardless of disability or level of ability. Many features considered accessible are also universally usable: lever handles, lower/more accessible light switches, off-center bathtub controls (i.e., located outside the tub area). Some features are considered “universal” when they are adjustable, such as shelving, closet rods, and countertops. The goal of Universal Design is to make all features and spaces within the dwelling unit accessible to and usable by anyone to the highest extent possible. Adapting universally designed units to accessible units as residents age or encounter changing lifestyles is much more cost effective than trying to build new units or move residents into new homes.

Many mandatory elements of accessible units are expensive and can cause the unit to look institutional. Some residents, even those who need the features, may feel that accessible units have a stigma and are reluctant to live in them. A few developers said they work around this by building all new units to universal design standards, then adapting them as necessary to meet accessibility requirements.

The majority of developers indicated only negligible differences between development costs for family housing and senior housing; however, some indicated a potential of 2 to 10 percent higher costs (numerous developers disputed others’ claims of costs above 3 percent) for senior housing due to the additional safety features. Because of the way development costs are bundled, it is often difficult to identify which costs relate to specific elements. Costs related to operations and maintenance, on the other hand, tend to be lower in senior housing because seniors generally cause less wear and tear on building structures, and have lower utility usage.

NCHH’s interviews identified some key factors and trends potentially affecting the future of affordable senior housing. First, seniors increasingly find it difficult to rely on retirement savings to cover housing and healthcare costs, and an upsurge in the demand for affordable senior housing may be on the horizon. Many for-profit organizations see the growing market, and thus a battle may be building between non-profit and for-profit developers and owners, with both positive and negative implications. Competition for Low Income Housing Tax Credits could increase, as could amenities in senior housing developments trying to win those credits. Although the competition might benefit seniors in some ways, it could also reduce some mission-driven services that nonprofit developers and property owners often offer at low or no cost as amenities take up more of their budget and overall funding become stretched thin with demand.

People are moving into senior facilities later in life, trying to remain at home as long as possible to maintain their independence, and they require in-home services to do that safely. Many senior housing facilities are getting first-time residents who are well into their 80s, and as seniors live longer, the type of support systems built into senior housing must change. Housing developers need to be prepared for the shifting age ladder.

The United States is aging fast, and studies show that per-capita healthcare costs are increasing at a similar pace, with lower-income seniors paying more for healthcare than their wealthier counterparts. When built or renovated with a focus on health, affordable senior housing could help fend off some of the rising costs of care, while helping seniors maintain their independence longer. Now is the time to incorporate amenities such as fitness and wellness centers into senior housing, and employ healthier, green building practices to help ensure low-income seniors stay healthy and independent as long as possible. 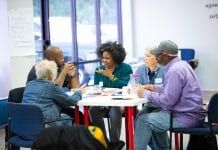 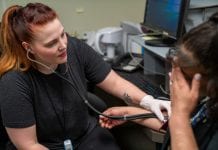 Hotel Rooms for the Homeless Change Health Outcomes Beyond COVID