After Elizabeth Schmidt’s husband died, she sold their mobile home to pay off debts and began living out of her car. Even the $309 monthly payment on her 2006 Suzuki Forenza became hard to afford, considering her Social Security check was only $570 per month.

Then Mrs. Schmidt got lucky, according to an account in The Post and Courier newspaper. She found an apartment at Marshside Village, a 48-unit multifamily building for low-income elders in North Charleston, S.C. “It was cold out there, I tell you. I got all my stress out when I moved in here,” she recalled. “I have a safe, clean apartment for just $118 a month.”

The rent is so low because Marshside Village was built using federal funding under a program referred to as Sec. 202, or even just 202—the number of the section in the Housing Act of 1959 by which it was authorized. The buildings it has produced for over 50 years offer modest apartments with basic architecture. But those properties, totaling more than 400,000 units, have transformed the lives of many older Americans, most of whom get by on nothing more than Social Security.

There are thousands of stories like Elizabeth Schmidt’s. Tenants of Sec. 202 properties are as close to universally happy as any group of people could be. They have a ready community of peers so they’re rarely lonely and disconnected, a common problem for elders living on their own. They have well-maintained homes with security and social activities. They receive help connecting with social and health services. Most importantly, they have economic security. They no longer have to worry that their savings will run out and they’ll have to try to rely on Social Security to pay for shelter as well as food, medicine, and other necessities.

The program provided all the capital needed for nonprofit groups and public housing agencies to create housing that gives elders a new lease on life.

“We want to eliminate circumstances in which persons have to make desperate choices about whether to pay the rent, buy sufficient good food, or purchase all their needed prescriptions and take them in the dosages prescribed by doctors,” said Dr. Laverne Joseph, CEO of California-based Retirement Housing Foundation, a nonprofit that builds housing for elders in 28 states, Washington, D.C., Puerto Rico, and the U.S. Virgin Islands.

Sec. 202 housing is open to households that earn no more than 50 percent of the area median income and that include at least one person who is 62 or older when they move in. Tenants pay just 30 percent of their income for rent. In most places in America, people at those income levels have no decent options in the private, unsubsidized housing market.

Given the program’s profound success, it was a shock when, in 2011, Congress voted to eliminate all new construction under the program. Although more than $380 million was provided in 2014, it was all allocated for modifying and supporting existing buildings, not for constructing new apartments. It was a decrease from $668 million in 2010.

At its peak in the 1970s, the Sec. 202 program produced 20,000 housing units per year. In 2002, the Commission on Affordable Housing and Health Facility Needs for Seniors in the 21st Century reported to Congress that we needed to build 40,000 units per year to house the growing numbers of low-income elders. But instead of ramping up, Congress ramped down, all the way to nothing.

Why did the federal government end the Sec. 202 program at a time when our older population is growing dramatically and their financial resources are shrinking?

People who provide housing for elders see no logic in the decision to kill new construction under the program. They say that members of Congress have generally expressed support for the program. Even in today’s vitriolic political climate, it doesn’t appear that the program had any enemies on Capitol Hill.

As best as anyone can figure, killing the program was just part of the general rush to cut federal spending and did not involve any cost-benefit analysis. But while the motive is unclear, the impact will soon be apparent, since the demand for low-cost apartments suited to elders is growing while the supply is set to start shrinking.

“The bottom line is that, with the end of new construction under Sec. 202, we are very close to the point where we will begin losing affordable senior housing faster than it is being developed,” said Thomas Slemmer, president and CEO of Columbus, Ohio–based National Church Residences, one of the nation’s largest nonprofit providers of affordable senior housing.

Slemmer explained that poor elders make up a large proportion of the tenants of housing that was built many years ago by a variety of now-defunct federal housing programs, not just Sec. 202. The programs housing the highest numbers of elders include public housing and Section 8 project-based rental assistance.

The supply of this subsidized housing is shrinking. Old, poorly located buildings are being lost to deterioration. Some newer, well-located units are being converted to market-rate use after legal obligations to serve the poor expire. Either way, if the units are lost, the tenants have to move, something that can be very hard for elders.

Sec. 202 buildings are also getting old, considering that the program began in 1959, so an increasing number of properties will be lost to obsolescence each year. With no new construction planned, they will not be replaced, and over time, the overall supply of subsidized housing for elders will shrink.

For every person like Mrs. Schmidt who gets into a government-subsidized apartment, there are 10 more households waiting for one. Demand is highest relative to supply in urban areas. In places with large proportions of low-income elders, it’s off the charts.

“It is very hard to tell seniors in desperate need of housing that the wait in most cases is two to three years,” said Steve Protulis, executive director of Elderly Housing Development and Operations Corp. Depending on their age, some of those who are turned away might have no choice but to spend their final years living in squalor and fear.

In testimony before the Commission on Affordable Housing and Health Facility Needs for Seniors in the 21st Century at a hearing in Miami, one nonprofit housing developer recalled the crush of people who showed up to apply for units in a new property in Little Havana. There were 100 apartments available for rent. A total of 6,897 people showed up to submit applications.

What happens to the 6,797 people who could not get into the property? The same thing that happens to elders waiting for Sec. 202 (or other subsidized apartments) to open up anywhere. The lucky ones live with relatives, but this has become less of an option in recent years as people have suffered economic setbacks and families have become more mobile.

The unlucky ones end up living doubled or tripled up with other poor elders, or take space in whatever filthy rooming house they can find. In the center of Little Havana, it’s not unusual for a single elder to live in “a roach-infested, 10-by-10 room with a hot plate as a kitchen, paying $350 to $400 a month,” said the director of the Miami housing nonprofit.

Joseph and Slemmer point out that providing affordable housing under the Sec. 202 program reduces government spending on nursing care. They say people living in their properties do not need nursing care until very late in life compared with people in other living situations.

The residents of Sec. 202 housing are also hospitalized at much lower rates than people of the same age living in private market housing. It costs the government $7,000 a year to house a person under the Sec. 202 program, but one trip to a hospital emergency room can cost $15,000 or more, Slemmer said.

But the economic arguments pale in comparison to the enormous positive energy one feels at properties serving elders. The tenants are engaged in living, not waiting to die. The Archives of Internal Medicine published the results of a study involving 1,600 elders that proves what housing property managers know from observation: Lonely people suffer loss of functionality sooner than those who are not lonely. They also tend to die sooner.

When Congress terminated new construction under Sec. 202, it was about reducing the budget deficit. But the flaw in that rationale is apparent when you consider the projections on the aging of the U.S. population and its increasing cost to taxpayers. Government spending on long-term care will suck up a larger and larger portion of federal and state budgets in the coming years. For example, New York state has the biggest Medicaid budget in the country, spending around $54 billion each year, and about 41 percent of that is for long-term care.

Affordable housing can help control that cost in two ways:

Unfortunately, Congress has shown no inclination to actively promote anything resembling a comprehensive solution. The one thing Congress got right is to continue funding the conversion of existing Sec. 202 properties to provide assisted living, but the meager level of funding it provided won’t go far.

This article is reprinted from Rebuilding a Dream: America’s New Urban Crisis, the Housing Cost Explosion, and How We Can Reinvent the American Dream for All, which describes today’s housing affordability crisis and the resurgence of urban decline—concluding with a forceful argument for governments at every level to start addressing housing problems. The book looks back at all that’s been achieved since Congress created the Department of Housing and Urban Development and a range of costly housing and urban programs 50 years ago. It also explains why we must stop the current wholesale retreat from those policies and preserve or expand existing programs, or else face the consequences of the growing gap between what Americans can afford and what housing costs—and the inequality that comes with that situation. 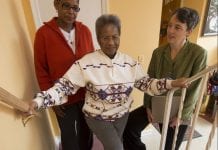