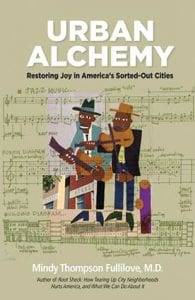 There was a time when I was working for the local paper when I was covering an unfolding story having to do with community policing and community prosecution. It took me frequently on foot through one of Albany’s lower income neighborhoods, often walking with people who knew the area better than I did. When I walked home from such an assignment across the city, especially as I approached and crossed neighborhood boundaries along the way, I always had the feeling I was stitching together in my head a picture of my city that was too easily and constantly fragmented by the ways we usually move through it and are, in Mindy Fullilove’s words, “sorted” within it.

As I read Urban Alchemy, I had a repeated desire to take those walks again with Fullilove at my side. I knew she would be fascinated by the “long stairs” that thread from downtown down the steep hill to the Sheridan Hollow neighborhood, and by how parking lots for state workers have lined the top and bottom of this hill, adding to the separation already caused by the hill itself. I knew she would have thoughts about the potential of the hidden gem of Tivoli Park, New York state’s largest urban wilderness area outside of Central Park, but out of sight and mind for much of the city because of its entrance in the back of this set of isolated neighborhoods.

Urban Alchemy is an unusual book in many ways. It’s so centered in a storytelling mode that it is almost an urban planning autobiography, heavy on the influence and work of Fullilove’s urbanist mentor, Michel Cantal-Dupart. This is not what we expect from a well-footnoted book marked “social science” and full of scatter-plot graphs and graphics with names like “The Periodic Table of Urban Restoration.” There were times, I admit, when my editor’s eye wanted to clear away a bit of the conversational detail so I could more closely follow the bones of the argument, or that the rich conclusions of all the stories would be summed up explicitly and driven home.

But I think that wouldn’t have necessarily been a worthwhile trade, because the thing that the storytelling mode does is it gives the reader that most precious and rare of insights: How change happens. Not just the depressing beginning, and the press release of the plan that makes it better — but the interim steps where people vent and argue and make false steps, where they try to figure out what they are seeing around them, where they learn how to see from others, and try to figure out what to do next when it isn’t obvious. In fact, Fullilove spends a lot of time describing one design firm’s practice of keeping “Design Sketchbooks” that contain all the drafts on the way to a final design, with notes, and that seems quite similar to what she’s doing with words.

Which isn’t to say that there isn’t a structure underlying the journeys Urban Alchemy takes back and forth between France; Orange, N.J.; and Pittsburgh, Pa. In fact, Fullilove’s nine-element “periodic table” strike me as one of the more complete guides to addressing the challenges of our struggling cities and regions that I’ve come across. It involves both big picture (“keep the whole city in mind,” “strengthen regions”) and local (“make a mark,” “create meaningful places”), steps that involve how to look at an issue (“unpuzzle fractured space” is my favorite, and perhaps the one you’re least likely to hear about elsewhere) but also how to keep energy for change alive and relationships growing (“celebrate your accomplishments”).

I’m particularly fond of the underlying premise of the book that you need to address the city and region as a whole — reconnect it, unsort it — to address the problems facing each part. “We can’t just treat the neighborhoods,” Fullilove quotes Cantal saying. “We have to remove the chasm that is dividing the poor neighborhoods form the other parts of the city. Doctors know that if you want to treat a boil on the skin, you have to treat the whole body. It’s the same for the city” (p. 19).

This strikes me as the perspective that is missing in so many planning exercises, where citywide plans largely ignore poor and segregated neighborhoods, and plans for poor and segregated neighborhoods look at them in isolation, as if their problems were their own fault. (Fullilove, a psychiatrist and author of Root Shock: How Tearing Up City Neighborhoods Hurts America, and What We Can Do About It, has been working this problem of forcible “sorting out,” especially in the forms of urban renewal and displacement, and its public health effects for a long time, including in these pages.)

I devoured Urban Alchemy, and every time I put the book down, I was filled with visions of showering copies on my city’s politicians, planners, and activists. I’m guessing many Shelterforce readers might well feel the same.