Shel Trapp has died at the age of 75 after a brief illness.

But those accomplishments, which came to define his life as an organizer, followed years of organizing achievements. Following college, Shel, a clergyman, ministered to mostly German-American parishes on Chicago’s North Side, and he was one of the first ministers to be arrested in Mississippi in support of civil rights.

After leaving the church in the mid-1960s, Shel attended a seminar led by Tom Gaudette, a student of Saul Alinsky, and went to work at Gaudette’s Organization for a Better Austin, where they fought the practice of blockbusting and racially inspired panic peddling. Known for his blunt, sometimes gruff, but compassionate nature, Shel honed his direct-action organizing approach during his years in Austin, bolstered by the 1971 Supreme Court case Organization for a Better Austin v. Keefe that settled the legality of whether protesters could picket in front of a real estate broker’s home.

Shel went on to highlight the bank practice of redlining, eventually corralling advocates into a successful fight to pass the Community Reinvestment Act. He considered his later work as a consultant for ADAPT, the national disability-rights organization, and its contribution to passing the Americans with Disabilities Act of 1990, among his proudest achievements. He also wrote several organizing books and training manuals.

Shel passed away on Oct. 18 at the age of 75 after a brief illness. He was a friend and comrade who will be missed. 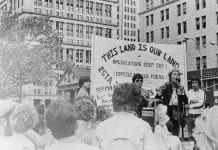