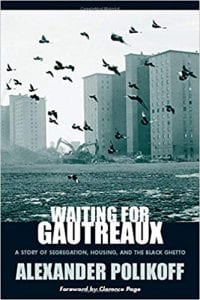 After five summers of urban riots, the Kerner Commission Report of 1968 warned of two separate societies-black and white, separate and unequal. It called for the dismantling of black ghettos and opening up the suburbs to promote racial integration. The city of Chicago has long been noted for its racially segregated housing and neighborhoods. Its policies were documented as early as 1955 in such books as Politics, Planning and the Public Interest: The Case of Public Housing in Chicago by Martin Meyerson and Edward Banfield, which recounted the failed efforts to introduce pro-integrative public housing after World War II.

In 1966, the same year that Chicago witnessed its own riots and two years before federal fair-housing legislation was passed, a team of public-interest lawyers, led by Alexander Polikoff, filed suit against the Chicago Housing Authority (CHA) in federal court, charging that its housing policy was illegal. The case, Gautreaux vs. Chicago Housing Authority and HUD (it later added a companion lawsuit against HUD for funding the housing authority) eventually went before the U.S. Supreme Court in 1976.

In his recent book, Waiting for Gautreaux: A Story of Segregation, Housing, and the Black Ghetto, Polikoff examines the Gautreaux demonstration program, a 30-year effort to eliminate the black ghetto and move CHA’s black tenants to integrated neighborhoods. The program began with the Illinois Housing Development Authority subsidizing apartment buildings in metropolitan Chicago and then using Section 8 certificates for apartments in predominantly white Chicago suburbs.

Waiting for Gautreaux is a lengthy and complex tale with fascinating characters-presidents, HUD secretaries and administrators, Chicago mayors, heads of CHA, federal judges and lawyers. It chronicles the deconcentration of Chicago’s public-housing tenants, the promotion of mixed-income projects through HUD’s HOPE VI program and the attendant controversies over tenant relocation and the loss of low-income housing.

It also covers transformative moments in the evolution of Chicago’s housing policy such as Federal Judge Richard Austin’s ruling against the CHA’s practices and his decision to withhold Model Cities funding until CHA adopted fair-housing policies. Polikoff recounts other memorable chapters in Chicago housing history, including a 1972 lawsuit filed by housing-integration opponents who argued that poor, public-housing tenants were “people pollution” under the National Environmental Protection Act and the appointment of a receiver in 1983 to replace CHA in implementing a 14-year-old court order to build scattered-site low-income housing in suburban neighborhoods.

The Gautreaux program succeeded, argues Polikoff, in part because suburban governments were unable to veto tenant moves, as they were with the siting of subsidized housing projects. But success did not come easily. According to Polikoff, it was difficult to find landlords willing to operate under the Section 8 rent ceilings and tenants willing to leave their old neighborhoods, friends and family to confront new problems.

In order to move, tenants had to pass credit checks, afford the necessary rent deposit, find transportation and possibly face hostility from white residents. As of 1998, only 7,100 families of the 40,000 Section 8 applicants had moved from Chicago’s ghettoized public housing to suburban housing. Some tenants didn’t qualify, and others chose not to participate or dropped out of the program.

Nevertheless, Polikoff sees Gautreaux as a model that should be adopted as national public-housing policy. Indeed, the Gautreaux demonstration program in Chicago did contribute to HUD’s creation of a five-city national demonstration program called Moving to Opportunity (MTO) in 1991. The idea was to test the scattering of Section 8 recipients over metropolitan areas as an alternative to their restriction to inner-city areas marked by poverty, racial segregation and deteriorating projects that have high rates of vacancy, vandalism and crime. To date, nearly 4,600 families in Baltimore, Boston, Chicago, Los Angeles and New York City have participated.

Since 1992, the primary program to reform public housing has been HOPE VI, which calls for replacing the most distressed public-housing units with mixed-income housing. HOPE VI has drawn strenuous opposition from housing advocates and others because of the reduction in low-income units and the likelihood that displaced residents will relocate to other racially segregated and high-poverty neighborhoods-a pattern that defies the original intent of the Gautreaux case. For example, whether those who have been displaced from Chicago’s now-demolished Cabrini-Green towers will end up in better housing and not in racially segregated neighborhoods remains an issue, especially since some former residents have already been relocated to new housing built on the Cabrini-Green site.

Polikoff’s argument that adopting a national housing-mobility policy will help poor minorities by ending the black ghetto and its many problems has been criticized by some housing policy analysts. Some of his critics believe that a race-based approach might be attacked as illegal, given recent and pending affirmative-action decisions by the U.S. Supreme Court, which is currently considering the issue of desegregation as it applies to voluntary racial balancing policies in the public schools in Seattle and Louisville.

Of course, the more immediate issue is the politics surrounding the introduction of poor, minority tenants on a large scale into many U.S. suburbs. Contrary to the Kerner Commission’s call, there have been very few policies that mandate opening up the suburbs. The contested history of the Mount Laurel decisions by the New Jersey Supreme Court in 1975 and 1983 (Southern Burlington County N.A.A.C.P. vs. Township of Mount Laurel), which required New Jersey’s suburbs to accept their fair share of regional affordable-housing allocations, certainly gives pause to Mount Laurel advocates. The compromise reluctantly fashioned by the New Jersey Legislature allowed the suburbs to buy their way out of up to half of their allocations and produced much less housing than the plaintiffs originally sought.

Unlike Polikoff’s proposal for a race-based approach, the Mount Laurel case and the court-ordered remedy did not explicitly factor in race, allowing suburban opposition to focus instead on the unsuitability of subsidized housing rather than on the potential race of its occupants. If the New Jersey Supreme Court had ordered a race-conscious regional housing allocation remedy, it is likely that resistance among many suburban jurisdictions would have been even greater.

Thinking back on his experience over the 40-year history of Gautreaux, Polikoff sees race as a central focus in addressing inequality. He writes:

“For the larger story of the black Americans, the question is what learning can be gleaned from all the years devoted to scattered sites, then to housing mobility, and now to mixed-income replacement for the demolished high-rises…But isn’t there a bigger story here?

My reflections have brought me to Alexis de Tocqueville who, some 170 years ago, called racial inequality the “most formidable evil threatening the future of the United States.” He went on to prophesy that the evil of racial inequality would not be resolved and that it would eventually bring America to disaster.

Today we might insert “domestic” before “evil.” But with that insertion made, I believe that de Tocqueville’s observation remains accurate, and that his prophesy is given current urgency by today’s black ghettos-that the black ghetto is a wellspring of our racial inequality evil that, if we are to avoid the fate Tocqueville prophesied, must be dismantled. A further conclusion is that Gautreaux tells us how best to go about the dismantling.”

Given the nation’s continuing racial divide and growing income inequality, Polikoff’s reflections on his role in the effort to redress racial discrimination in public housing and the segregation of the African-American poor in many inner city neighborhoods are well worth pondering.