Obituaries for Frank Wilkinson, who died Jan. 2 at the age of 91, focused primarily on his role as a leading opponent of McCarthyism and his fervent dedication to the first amendment. We lose a champion just at the time the assault on our civil liberties is increasing. The extension of the Patriot Act and the National Security Administration’s questionable spying activities are the most egregious examples of the present administration’s attempt to undo all that Wilkinson stood for.

It is worth remembering that Wilkinson’s crusade for the first amendment actually began when he was fired from the Los Angeles Housing Authority for his radical politics. The years he spent fighting for our basic freedoms were catalyzed by his own experience as a victim of the 1950s Red Scare when he was a housing activist in Los Angeles.

Wilkinson spent nine months in prison in 1958 after being held in contempt of Congress for asserting his First Amendment right not to disclose his associations and beliefs before the House Un-American Activities Committee. After his release from prison, he organized the National Committee to Abolish HUAC, later renamed the National Committee Against Repressive Legislation. Thanks in part to Wilkinson’s work HUAC was abolished in 1975. Wilkinson also forced the FBI to release 132,000 pages of files they had collected on him from spies and informants, and successfully sued the agency to apologize for these illegal activities. Wilkinson also co-founded the nonprofit First Amendment Foundation and served as its longtime director. Until his death, he dedicated his energy and brilliance to defending our basic rights, including challenging the federal government’s right to spy on private citizens.

Wilkinson came to his activism through his own experience. He grew up in Beverly Hills, went to UCLA where he joined the Republican Party, was active in “Youth for [Herbert] Hoover” and considered becoming a Methodist minister. During a post-college trip around the world, he was radicalized by his exposure to poverty. For his generation of idealists who came of age in the Depression of the 1930s, public housing was part of a broad movement for social reform and economic justice. Wilkinson joined the new Los Angeles Housing Authority in 1942, when it was an independent agency with the mission of ending slum housing in the city. Under then-Mayor Fletcher Bowron, a reform-minded liberal Republican elected in 1938, the L.A. Housing Authority supported the idea of building decent housing for poor and low-income families and believed in racial integration in the city’s developments.

After World War II, Bowron sought to expand the program, especially for the many veterans who faced a desperate housing shortage. He endorsed a plan to raze many homes in the tight-knit Chavez Ravine neighborhood and to replace them with a large public housing development, to be designed by world-class architect Richard Neutra. It was to include two dozen 13-story buildings and more than 160 two-story houses, as well as new playgrounds and schools.

Bowron, Wilkinson and other reformers viewed the housing plan for Chavez Ravine as a way to improve living conditions for poor Angelenos. The first people to oppose the idea were the immigrants who lived in Chavez Ravine. This community, with its small shacks, unpaved roads and no sewer system, was still their home. One of the incentives offered to the residents was the promise that they would be the first ones to move into the new housing.

While Wilkinson and the housing authority wanted to rebuild the neighborhood for the people who lived there, Los Angeles business leaders and right-wing politicians wanted to bulldoze it for other reasons. Land so close to the city’s downtown was worth more exploited for profit than for the provision of affordable housing. Using McCarthyite Red Scare tactics, these forces combined to characterize the Chavez Ravine proposal – and public housing in general—as socialist planning. The attack focused on its leading advocate, Frank Wilkinson—portraying him as a dangerous Communist. Brought before the House Un-American Activities Committee, he refused to answer their questions on First Amendment grounds. He was fired from his job, tried and sent to federal prison.

The same business leaders who opposed Wilkinson and public housing also ended Bowron’s political career. They handpicked Congressman Norris Poulson to run against Bowron and orchestrated his mayoral victory in 1953. During his campaign, Poulson vowed to stop the Chavez Ravine plan and other examples of “un-American” spending. Poulson won the election, public housing lost.

City officials allowed Chavez Ravine to languish as an almost abandoned slum until the mid 1950s, when Councilman Kenneth Hahn enticed Brooklyn Dodgers owner Walter O’Malley to bring his team to Los Angeles. The city bulldozed the few remaining homes, forcibly evicting the last residents. No one was relocated into better housing; instead, the deep ravines were filled in to make the flat playing field of Dodger Stadium.

The story of Chavez Ravine, along with that of Frank Wilkinson and the L.A. Housing Authority, lay dormant for a long time. In recent years, however, the “battle of Chavez Ravine” has become a legend of urban planning, inspiring a play by the Culture Clash theater group, a recent album by guitarist Ry Cooder (who spoke at the memorial service for Wilkinson), many books and academic articles. After years of national activism for the First Amendment, Wilkinson became known again, this time for his housing work. A positive history of public housing, and a new housing hero, were returned to us.

To the extent that public housing now bears the stigma of failure, it is due not to the progressive values that inspired Wilkinson and others, but to the political influence of right-wing forces that fought to undermine public housing from the beginning.

Many of the same battles that Wilkinson fought 50 years ago”—over land use, government subsidies for the poor, racial integration and “not in my backyard” opposition to low-cost housing – confront the current generation of public officials and housing activists.

Even today, right-wing politicians use stereotypes of public housing to attack the very idea of government activism. During his 1996 campaign, Republican presidential nominee Bob Dole said that public housing was “one of the last bastions of socialism in the world,” calling the authorities “landlords of misery.” Most recently, after Hurricane Katrina, Congressman Richard Baker (R-LA) told lobbyists, “We finally cleaned up public housing in New Orleans. We couldn’t do it, but God did.”

Like his fight to protect the First Amendment’s guarantee of free speech, Frank Wilkinson viewed decent, safe, affordable housing as a basic human right. He is an inspiration to tens of thousands of activists in this nation. In his memory, we recommit ourselves to dismantling the Patriot Act, as he fought to dismantle HUAC. And in his memory, we fight for a safe, decent and affordable place for all to call home. 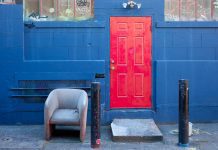 Gentrification: Is Pop Culture Getting It Right?