In June, 1993, President Clinton signed the National Voter Registration Act, legislation that progressive activists had been demanding for almost a decade. Usually called the “motor voter” bill, it requires all states to streamline their voter registration laws to make it easier for citizens to sign up. Specifically, it requires states to give voters the option to register when they apply for or renew their driver’s licenses at state DMVs (thus, “motor voter”), to enlist voters at social service and other agencies (where AFDC, food stamps and other benefits are distributed), and to allow voters to register by mail. Finally, the federal law orders states to implement these provisions by Jan. 1, 1995.

Progressive activists should savor this clear-cut victory. When President Clinton signed the bill at a White House ceremony, the two key architects in the decade-long motor voter crusade—Frances Fox Piven and Richard Cloward, radical social scientists, strategists, and activists—were on hand for the Washington press corps and the C-SPAN audience to see.

The motor voter bill has the potential to dramatically alter the terrain of American politics. It could significantly expand voter registration among low-income and minority Americans, making it much easier to get out the vote for candidates and causes in tune with the concerns of currently disenfranchised citizens. Candidates for office would have greater incentives to address progressive issues.

An expanded electorate, particularly among the poor and people of color, could make the margin of difference in many close races. There’s almost no doubt, for example, that had the motor voter law been in place four years ago, Harvey Gantt, the progressive African-American former Mayor of Charlotte, would have defeated incumbent Senator Jesse Helms of North Carolina. And in Minnesota, which has one of the nation’s highest voter turnouts, thanks in part to that state’s model motor voter system, Sen. Paul Wellstone gives the system partial credit for his last victory. Multiply these examples in races across the country for school boards, city councils, mayors, county boards of supervisors, state legislatures, Congress, and even president, and it’s clear that the motor voter law could have a tremendous political impact.

The U.S. has the lowest level of voter turnout of any Western democratic nation. Typically, slightly more than half of the eligible voters go to the polls in national elections; even fewer vote in local and state elections. In contrast, between 80 percent and 90 percent of eligible voters go to the polls in Western Europe, Australia and New Zealand. The federal motor voter law was designed to bring the U.S. closer to our sister democracies in terms of expanding citizen participation.

In most other democratic countries, the government actively encourages and takes responsibility for registering voters. When an election is called in Canada, for example, a complete national registration is carried out in a matter of weeks by a federal agency called Elections Canada.

Most experts believe that our nation’s crazy-quilt voter registration laws, rather than apathy or satisfaction with the status quo, account for these low figures. For example, in our highly mobile society, people are dropped from the voting rolls every time they move, and many don’t get around to re-registering in time for the next election. This undermines voter participation because most people don’t start paying attention until a few weeks before an election – usually after the registration deadline. Under the new law, citizens won’t be purged from the voter lists when they move within the same state since they don’t forfeit their drivers licenses.

The motor voter law will certainly increase voter registration significantly. About 91 percent of America’s voting-age population have drivers licenses or photo ID cards issued by state DMVs. At least another 4 percent – those with no reason to have contact with DMVs – will be reached through social services, disability, and other offices.

But will these newly registered voters go to the polls? Currently, about 85 percent of registered voters actually cast ballots in national elections. So an increase in overall registration is likely to dramatically expand election day turnouts. How much the turnout increases depends on whether candidates and movements mobilize voters and address their concerns.

Some states, including California, are dragging their feet in implementing the federal law, since many politicians don’t want to see a lot of poor people casting their votes. And how the law is implemented – for example, whether DMVs use one or multiple forms for registration – can make a big difference. Registering people at places like unemployment offices – which is only optional in the federal law – would also help enfranchise the poor.

Housing activists need to monitor and pressure their state officials to fully implement the federal law. They can contact Human SERVE (622 West 113th St., New York, NY 10025; phone 212-854-4053) – the major force in the motor voter movement – to get the names of local groups in each area working to implement the law.

What Does It Mean for the Housing Movement?

American politics often boils down to a struggle between organized money and organized voters. The current fight over national health care exemplifies the power of corporate PACs in shaping the agenda. The housing movement is familiar with the influence of organized landlords, developers, bankers and brokers, whose campaign contributions give them a powerful voice in city halls, state legislatures and Congress.

The motor voter bill could have important ramifications for the housing movement.

During the past decade, the movement has made some significant progress on issues such as bank redlining and government and corporate support for community-based nonprofit housing. Even at the national level, we’ve achieved important victories in strengthening the Community Reinvestment Act, protecting tenants in subsidized developments, and expanding resident participation in public housing. This year, we even saw a slight increase in the HUD budget.

But housing is still not near the top of the nation’s public agenda. At the local level, as well as in Washington, housing groups are still fighting an uphill political battle when it comes to redlining, tenants’ rights, code enforcement against slumlords, public safety, basic government services and similar issues. In California and Massachusetts, once strongholds of tenant activism, the landlord lobbies are confident that they will finally enact statewide laws pre-empting local rent control.

Housing activists still have few friends in political office. Although the housing movement has occasionally helped its allies (and sometimes its own activists) to win public office at all levels of government, these victories have been few and far between.

We know that most public officials usually ignore the movement’s concerns unless activists disrupt “business as usual.” The motor voter bill doesn’t mean that all this has changed and the housing movement should abandon protest and confrontation. It does mean that housing activists can have a stronger voice in electoral politics if they mobilize people to exercise the vote as part of grassroots campaigns.

Tenants, particularly low-income tenants, are currently less likely to register, and to vote, than almost any other group in society [see box below]. The motor voter bill guarantees that renter registration – including those who live in subsidized and public housing – will increase significantly. Once implemented, the motor voter bill will make get-out-the-vote efforts much easier, since grassroots groups will be able to assume that most people are already registered.

If the proposed Housing Justice Campaign, sponsored by the National Low Income Housing Coalition and its allies, is to gain momentum, reform the regressive mortgage deduction – the “mansion subsidy” – and provide more federal housing funds, local housing activists will have to organize politically to make it difficult for Congressmembers to vote against the poor.

Like the earlier Voting Rights Act, the motor voter bill removes a major barrier to political participation, especially for the poor. It has the potential to balance the political playing field between corporate America and average citizens. (Campaign finance reform would help, too!) Whether it fulfills its potential depends on progressive movements mobilizing citizens to take back their government from big business and the housing-industrial-complex.

Source: U.S. Bureau of the Census

Source: U.S. Bureau of the Census
* The Census Bureau’s analysis of voter registration and voting is based on self-reporting, not actual election data. This method tends to over-report both registration and voting. It is not clear whether owners and renters exaggerate their political participation at the same rate. 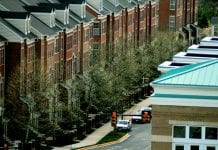