Josh Ishimatsu - January 30, 2016
Gordon Chin started San Francisco Chinatown Community Development Center (CCDC), a longstanding CDC well-known in the field, in the mid-1970s. In June 2015, he released Building Community, Chinatown Style, a book about his professional life, the founding and evolution of CCDC, and the future of community development. Josh Ishimatsu, director of Research and Capacity Building at the National Coalition for Asian-Pacific American Community Development, and a regular Shelterforce contributor, spoke with Chin about where community development is going, and where it should go. 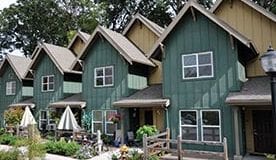 Stuck in the Middle

Michael Hickey - July 17, 2013
What do community development intermediaries do these days, and why do we need them?

Going the Other Way: Adding Organizing to Development

Bob Brehm - January 1, 2002
Some groups move in the opposite direction from Nobel Neighbors, starting out with a development focus and adding in organizing for the same reasons...