2 POSTS 0 COMMENTS
Staci Berger is president and CEO of the Housing and Community Development Network of New Jersey (the Network), and directs this statewide association of over 250 community-based development organizations, created in 1989. She was previously its director of advocacy and policy. Prior to joining the Network, Staci worked for nine years with New Jersey Citizen Action where she went from being an organizer to the Political and Legislative director, where she devised and implemented political, legislative, and electoral strategy for the state’s largest non-profit, non-partisan independent watchdog coalition. She received her Masters in Public Affairs and Politics from Rutgers University in 2004. Staci has served as an associate trainer for the Midwest Academy, a leading national training institute for the progressive movement, and worked as a labor organizer with the AFL-CIO Organizing Institute and the Health Professionals and Allied Employees/AFT/AFL-CIO. 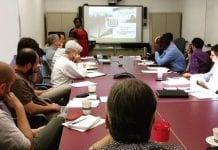 Fair Housing and Community Developers Can Work Together

Community Development Field Staci Berger - October 15, 2015
Two organizations in New Jersey show that with a good working relationship, a balanced approach to healthy communities and housing choice for all can be more than pretty words.