1 POSTS 0 COMMENTS
Reco Swift is a grassroots leader with ONE Northside in Chicago. He has been homeless in six states and nine cities. He currently lives in a Chicago Housing Authority building for seniors, the Hollywood House. He has led national and local work to ensure housing authorities are regulated and affordable housing is being built. He is also a leader with the housing justice campaign at People’s Action and with Chicago Housing Initiative. 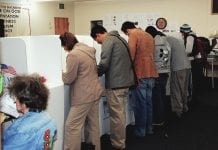 Dear Presidential Hopefuls: The People Want to Talk to You About Housing

Housing Tara Raghuveer, Reco Swift, Monique George, Sarah Stewart, and Linda Armitage - October 31, 2018
Before we celebrate its resurgence as a national political issue, and certainly before we set out to solve for housing injustice, we should understand why America has overlooked housing.