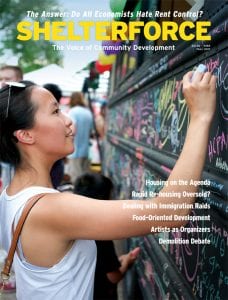 This editor’s note appeared in the Fall 2017 edition of Shelterforce magazine.

Shelterforce began as a tenant organizing newspaper in the 1970s. Over the decades we expanded to cover the whole affordable housing field, and then expanded again to include a wide-angle take on the community development field. Just as many of our readers do, we take a comprehensive approach to this work, understanding that neighborhoods are ecosystems where many things interact, that fighting poverty can’t be done with just one tool and that justice is intersectional—to be meaningful it requires justice on many fronts all at once.

At Intersections, the conference held by the Grounded Solutions Network in October, I learned that a community land trust on the San Juan Islands off the coast of Washington state has figured out that it’s cheaper to buy houses that are slated for demolition in rapidly gentrifying areas in the Vancouver and Seattle metros and bring them to the island by barge than it is to build from scratch. As a bonus, they get homes with history and character. Construction costs are extremely high there because it’s an island—this isn’t necessarily a solution that will have widespread applicability in other places, but the unexpectedness of it, and the sheer win-win of it was delightful.

It was also startling partly because sometimes it feels like true innovation is rare, despite our frequent use of the word, and despite our abundance of determination. To some extent that’s because the challenges of community development have never been about a lack of creativity in the people doing the work, or even about the complexity of the problems. They have been more a matter of political will and resources. Often an innovative approach is not better than a well-funded, well-executed tried-and-true approach. When we say we don’t want to reinvent the wheel, that’s often what we mean. Each place is unique and its path will look very different, but the toolbox is pretty well stocked.

And yet creativity and persistence abound, including finding ways to get around the political will and resources conundrums, and those stories are still inspiring: The unusual way the partnership between Children’s Hospital and Community Development for All People is structured that has allowed them to do so much. The fact that affordable housing is now on the political agenda enough that Atlanta is holding entire mayoral forums about it. The coining of the phrase “food-oriented development” and its contrasts to transit-oriented development.

And we also are taking a fresh look at some not-so-new things, including the civil rights movement and rent control, and telling stories about fresh ideas about how to implement (and in some cases new funding partners for) some of the tried and true—home repair support, neighborhood stabilization through nonprofit lending, and creative placemaking.

There are still surprises to be had. Please join me in discovering some of them in this issue, and let us know how you end up using these ideas in your work.