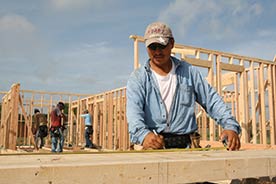 The community development field is in the midst of deep fundamental changes, including these noteworthy trends:

NALCAB — National Association for Latino Community Asset Builders — represents and serves a geographically and ethnically diverse group of over 90 nonprofit community development and asset-building organizations that are anchor institutions in our nation’s Latino and immigrant communities across 28 states and the District of Columbia. NALCAB has worked closely with its local member organizations and reacted to this dynamic economic environment by proactively responding to members’ self-identified resource needs, understanding and adjusting to gaps in local services, and deploying peer mentors to disseminate best practice-based solutions. Collectively navigating the competitive resource development landscape, the NALCAB network has achieved its greatest impact when local organizations have come together in functional collaboration and consortia.

For example, the 2009 HUD Neighborhood Stabilization Program Round II Grant Program opened funding to nonprofit consortia for the first time. Moving to take advantage of the opportunity, NALCAB organized a collaborative of 15 community development corporations operating in eight states and the District of Columbia, all with existing affordable housing development programs. The consortium chose Chicanos Por La Causa of Phoenix — a high capacity performer with a long history of successfully implementing federal grant projects — to act as the lead applicant. The CPLC/NALCAB Neighborhood Stabilization Program Consortium was awarded $137 million, the largest single federal investment ever targeted to low-income Latino communities. Since consortia members all had varying degrees of experience and capacity, NALCAB developed a peer supportÐbased technical assistance process among the groups: each CDC made site visits to peers and shared best practices. In October 2012, the CPLC/NALCAB NSP Consortium reached 100 percent expenditure, four months ahead of HUD’s deadline.

Much of the recent Latino population growth in the United States has occurred as recently arrived immigrants sought out new employment opportunities in non-traditional regions such as the Northwest and Southeast. State and local governments, as well as the existing nonprofit infrastructure in these regions, often do not have the linguistic and cultural capacity to address the critical issues emerging within diverse Latino communities that have witnessed population increases in excess of 100 percent over the last decade. Together with local grassroots organizations in these regions, NALCAB advocated with private foundations and corporate partners to provide funding for coordinated regional efforts that sought to develop the nonprofit asset-building infrastructure to effectively build family wealth and community assets in these burgeoning communities through implementation of culturally and linguistically-relevant curricula, technical assistance and training. Since 2009, NALCAB has secured almost $2 million for this effort, with approximately $700,000 of this in the form of subgrants going directly to local emerging community CDCs. More importantly, NALCAB has assisted local organizations in these regions to directly secure more than $5 million in federal and private grants to substantively advance their work.

These examples illustrate the potential of collaboration among local organizations, particularly for broader regional and national strategies, as well as the importance of maintaining a national organization fulfilling the needs of local organizations, rather than the other way around. NALCAB believes that the appropriate role of a national organization is shifting away from aggregating capital and moving toward opening direct access to capital for local organizations. In general, fewer resources should be invested at the national intermediary level, and more in local communities. Realistically, few, if any, of these organizations would have been able to access capital in the amount that was awarded as an individual applicant, but by using NALCAB as the primary organizer, connector, technical assistance provider, and at times, the applicant itself, Latino-serving CDCs throughout the country have received immense value for their united actions. Juntos somos más. Together we are more.