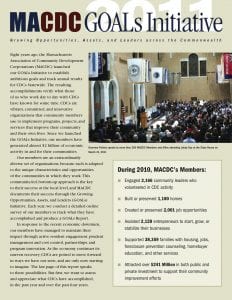 A new report issued by the Massachusetts Association of Community Development Corporations that documents the collective impact of CDCs across the state shows CDCs have been a boon to economic investment over the past four years.

In June, on the same day as a state house hearing was scheduled on a new legislative proposal that encourages more private sector investment in high-impact community development initiatives, The Massachusetts Association of Community Development Corporations (MACDC) released its annual GOALs Report showing that, despite the worst economy in 70 years, Massachusetts CDCs generated over $1 billion in economic investment from 2007 to 2010 — exceeding MACDC goals established four years ago.

GOALs, or Growing Opportunities, Assets and Leaders, documents the collective impact of 60 CDCs across the state in six critical areas of community development impact. The report’s findings were released to help highlight the Community Development Partnership Act, a new bill that is designed to generate $12 million of new private investment in high-impact community development initiatives across the state. In 2009, MACDC Executive Director Joe Kriesberg examined how CDCs could respond to 21st-century challenges (SF Fall 2009), addressing both the financial viability of CDCs, as well as establishing sustained working capital.