And so today, London stands on the edge of a perennial crisis. As house prices soar and public provision dwindles, some 40,000 UK families were forced to hand their keys back to their mortgage lender in 2008. Leading economist Ian Shepherdson has predicted that repossessions will leap to between 100,000 and 120,000 a year by 2011, as levels of unemployment increase and incomes are squeezed. This soon becomes personal in a country with a population the size of Texas and California combined crammed into a landmass smaller than that of Michigan.

It is land value and speculation that is the problem. In 1971, the average home in the UK cost £5,632 ($8,500). By 2008, that average had risen to £227,765 ($340,000), and £370,571 ($550,000) in London. A recent study showed that if groceries and other essential items had risen at the same rate, a single roast chicken today would now cost $71. But it’s not the facts and figures that make this unsustainable state of affairs so pressing — it is the testimony born out of them: the mother who works an extra shift as a cleaner after her nine-to-five to make ends meet; the 15-year-old brother and 13-year-old twin girls sharing a single bedroom while their parents sleep on the couch; the family who have saved for years to afford a downpayment only to find that they can’t get a mortgage with less than $45,000. These are the stories we hear every day as community organizers.

At people’s assemblies across London throughout 2006 and 2007, London CITIZENS’ membership unanimously voted to make affordable housing — through the Our Homes, Our London campaign — a chief focus of our community organizing efforts through to the 2012 Olympics and beyond. But organizing is about solutions — that is what separates it from too many others who care only to focus on problems. We needed a mechanism that we could build around, one that would negate once and for all the great gap and dichotomy that has arisen between depressed council estates and the free market that so few can reach.

CLTs now provide perpetually affordable housing options in over 200 locations and across 42 states within the United States. By separating the land value from the cost of a house, affordable homeownership can be passed down through the generations within a local community, preventing segregated pockets of gentrification and ghettoization arising in a city like London and helping organize and reweave the fabric of our civil society. And so, on a cold night in November, local residents from across the city huddled in a church hall in Stratford — the site for the London Olympics in 2012 — and voted unanimously to try to establish the UK’s first ever urban CLT on the site of an old derelict hospital in Mile End, just down the road.

St. Clement’s, the name by which the hospital is still known, has the potential to provide up to 100 units of permanently affordable four-bedroom houses at approximately half the market rate, right in the heart of what is historically London’s poorest borough. An international study visit to the Champlain Housing Trust in Burlington, Vermont, soon set the wheels of activity in motion and the London CITIZENS Community Land Trust was formed.

There was no shortage of people wanting to get involved. And as organizers, we knew the people and the institutions that could make this happen. But one of the greatest lessons, which we learned very early on, was the need to keep it local and the need to keep it real. There are tens of well-organized charities in London working hard for “better housing.” There are hundreds of Housing Associations across the UK with carefully crafted mission statements that talk about the need to “empower residents and restore communities.” And there are private developers with millions and millions of dollars, eager to develop sites as beautiful and historic as ours. We couldn’t ever outspend them. We couldn’t even speak their language in meetings at the start. But this didn’t matter — or at least, we made sure that it didn’t. Every one of our meetings started with an individual’s personal testimony: an affirmation as to why, despite working two jobs seven days a week, they had given up some of their very limited time to be at this meeting and what the project meant to them. It’s hard, sitting on the other side of the table, to refuse a further meeting or the creation of a site assessment for a potential CLT on the grounds of “incompliance with a Section 106 Agreement” after hearing stories like that.

And so we gathered momentum. Behind the scenes we did the ground work, pulled together architects and developers, and banged our heads against the brick wall that is the consistent lack of funding opportunities for such activities in the UK:

“So this thing has never been done in a British city before?”

“No, this is game-changing stuff. We’ll be the first!”

“Right … and who will be responsible for administering the project?”

“But you don’t want money to build the thing, but to pay for ‘an organizer’?”

“Yes — we have 11 schools, churches, mosques, and community groups within one mile of the site and need someone to help them coordinate and find future leaders.”

Every time so far this has meant the money going instead to someone who proposed to write a glossy report about national housing policy and the “sad sights” to be found within parts of town they have only ever visited on Wikipedia. Hence the one day a week I mentioned at the start.

But when you’ve got something that isn’t so much “a campaign” as the lives and the hopes of local people, then skills, persistence, and leadership the likes of which you could never employ come to the fore. And slowly, this persistence and local leadership has paid off. Local councilors, then the leader of Tower Hamlets Borough Council, and then the mayor of London were met with testimony and then asked to come to our people’s assemblies and directly address our issues. How could they say no? And then, on Monday, May 3, 2010 — just three days before our recent general election — the three leaders of our main political parties accepted an invitation to our public assembly, at which 2,500 people put the case to them for community land trust homeownership, live on national television.

This summer should see the beginning of the bidding process for the St. Clement’s Hospital site, if the current owner — the Homes and Communities Agency — goes ahead with selling the land. This means we’re going to have to compete for it, but through a long struggle for political recognition and support, and through building up a great team that combines planners sitting side-by-side with potential residents in our board meetings, it is a fight we know we can win. And if this pilot scheme is successful, the London 2012 bid team have committed to earmarking space for up to 2,000 units of CLT housing to be built upon the Olympic Park site after the games. These will be used to house hard-working families within their own communities, will prevent urban drift and gentrification, and will provide an in-built subsidy that will grow rather than diminish over time. But above all else, they will stand as a lasting legacy to what organized communities can achieve and demonstrate a far greater vision for what the U.S.-UK “special relationship” could mean. 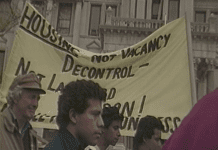