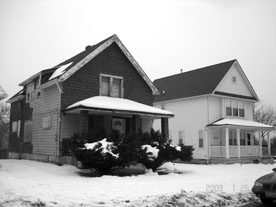 Like a tsunami, each annual tidal wave of foreclosures has left in its wake hundreds of thousands of vacant, blighted, and vandalized properties. The immediate damage—the disrupted lives resulting from the emptying of homes—has been followed by collateral damage to neighboring homeowners, and their communities at large.

Take, for example, the house on the right (Fig. 1). It was built in 2004 by the Buckeye Area Development Corporation, a local nonprofit community development corporation (CDC) in Cleveland, Ohio, and was sold to a homeowner for $141,000. In 2006 Wells Fargo foreclosed on the house on the left and took the property at a Sheriff Sale, and that house became vacant. Wells Fargo let it sit vacant for two years, while it was broken into and vandalized. Wells Fargo then sold the damaged house to an investor in 2008 for $1,200 and the investor continued to let it sit vacant and deteriorating. The owner of the house, a single mother with two children, could only watch while the value of her home plummeted—if she had to sell she’d be lucky to get $80,000.

The full measure of the post-foreclosure damage is understood only when one considers that every blighted house could negatively impact five or six other houses near it. In Cleveland today there are an estimated 11,500 vacant houses so those vacant homes could easily impact the market value of 60,000 occupied homes. Speaking to scale, if each home lost $10,000 in value, it would equate to a $600,000,000 loss of homeowner equity. Further, that loss in value inevitably results in a loss of property tax assessment and lost tax revenue for publicly supported schools, police, fire and social services.

The saga is doubly tragic because of how it has undermined, and continues to undermine a highly regarded community development system in Cleveland that was making steady progress through the 1990s and the early part of the 2000s. Unfortunately, while that system injected homeownership equity into the front door of neighborhoods, by way of responsible local lenders, there were irresponsible subprime lenders and Wall Street investment bankers who mined neighborhood equity and extracted it out the back door.

Much of the news coverage over the past several years has focused on the reckless acts of financial institutions that led to wholesale foreclosures—like making bad loans or recklessly buying thousands of those loans without exercising any due diligence to determine what they were buying.

In the case of those financial institutions that bought the mortgages, specifically the servicers and trustees who manage the loan pools, it appears that the same irresponsible decision-making that brought us the foreclosures in the first place is now compounding the problem by the manner in which it’s handling post-foreclosure vacant property—what banks refer to as REO property, or “real estate owned” by the financial institutions.

In this regard, Cleveland may again serve as a useful illustration, and to some extent, as a warning, to other cities that may have yet to experience a severe post-foreclosure problem. Any city, regardless of how strong its real estate market might appear, could suffer a market failure if it reaches a critical mass of foreclosures. For hundreds of years foreclosures have worked as a successful debt recovery mechanism, when there is an isolated foreclosure surrounded by otherwise stable occupied homes. The foreclosed home can be quickly re-marketed, re-sold and the loss minimized. But when lenders flood neighborhood markets with bad loans, and then flood the same neighborhoods with foreclosures, the system breaks down completely. Streets in Cleveland that had no foreclosures five years ago now have four or five. Streets that had a few foreclosures now have 10 to 20.

The growth of this problem in the past few years, and its impact on property values, is illustrated by a study recently done by Case Western Reserve University. In 2005, less than 10 percent of REO property in Cleveland was sold by banks for less than $10,000. By 2008, 65 percent of the REO sales by banks were for less than $10,000 (such as the house in the photo at the beginning of this article, sold by Wells Fargo to an investor for $1,200). A $1,200 sale would appear to be no bargain for the bank. But consider that the house (pictured) probably has $50,000 or more in code violations. After sitting for two years and being repeatedly vandalized, the damage could require all new mechanical systems, new plumbing, new wiring, mold remediation and more. Moreoever, if the city were to demolish the home, the vacant lot would then have a $10,000 demolition lien against it. Vacant lots in Cleveland typically sell for $500 to $1500, often more than foreclosed homes in poor condition. A vacant lot with a $10,000 demolition lien against it is a liability with a negative value.

What we now have taking place in Cleveland is an “REO Race,” i.e., can financial institutions “unload” or “dump” their liability before the local municipal code enforcement officials catch up with them? In their race to dump property, the banks are making no effort to screen the buyers.

So who’s buying these properties and what are they doing with them? The buyers range from inexperienced individuals who watch late-night infomercials and are captivated by the promise of making millions from real estate, to a new niche industry that seems to have sprung up in the past decade: companies, most of which are out of state, that specialize in making bulk purchases of vacant foreclosed homes. Their business models vary: some merely act as wholesalers and flip the package of 10 to 20 homes to another investor for a small markup; some post them on eBay without making any repairs; some make a bulk purchase only to acquire one decent prospect, assuming they may abandon the other properties.

The best of the REO investors actually do some renovation, but all too often it amounts to only cosmetic work followed by putting the house back on the market without addressing more serious issues. This was made clear to me in summer 2008 when I had the opportunity to join with other colleagues to spend a day meeting with two out-of-state investors to discuss their business goals and objectives. One of the most striking admissions came when one of them said: “If we had to bring these properties up to code, our business model wouldn’t work.” In other words, they were saying that they were going to come into the community and violate housing codes.

Evidence of intent to evade local housing laws is made abundantly clear by the docket of the Cleveland Municipal Housing Court. In the period beginning January 1, 2009 through October 23, 2009, the court levied $1.5 million in fines to 11 REO investors for failing to show up for court hearings.

Foreclosure litigation itself is not the true cause of damage to neighborhood markets. The real damage is being done when tens of thousands of homes are emptied out, and those doing the emptying take no responsibility for the physical condition of the vacant home.

The vast majority of foreclosures are being initiated by out-of-state financial institutions. They want the privilege of using the state’s legal apparatus to bring foreclosure actions, but they don’t want to be held accountable for state and local laws pertaining to health and safety codes. Moreover, foreclosing financial institutions want the privilege of offloading their liability for public nuisance property by dumping those defective assets to investors demonstrating similar disdain and contempt for Ohio’s laws.

Changing the Economics of Foreclosure and Vacant Property Ownership

Following the age-old axiom that behavior doesn’t change until it hits the pocketbook, civic leaders have taken a number of steps to shift financial responsibility to the banks and REO investors.

In its 40-year history with community development, Cleveland has consistently exhibited two major strengths. First, it’s a city steeped in community organizing traditions, and civic and community leaders have not been shy about holding banks and investors accountable – as noted in the examples above. But this is also a city of innovation, as witnessed by the Cleveland Housing Court, the Cleveland Housing Network (one of the first scattered site lease-purchase programs in the country), and the publicly accessible “NEO CANDO” property data system at Case Western Reserve University. Civic leaders have been no less creative in addressing the current crisis of post-foreclosure vacant property.

Cleveland was hit hard by the foreclosure crisis and hit earlier than many other cities. Because of this Cleveland has had time to develop a variety of innovative approaches that other cities could learn from. The Cleveland experience can be distilled down to several major lessons learned. First, ramp up code enforcement to control the ownership and irresponsible transfer of post-foreclosure vacant property. In other words, change the economics of owning vacant property. Second, while fighting the immediate battle, be forward-thinking and start planning ahead for the sustainable reuse of accumulating vacant property. Third, and critically important, establish an entity, such as a land bank, that can receive and responsibly hold vacant property. It should be noted that any land bank can only be useful if it has the proper financial resources to undertake this task. Linking land banks to excess spin-off property tax revenue, as first developed by the Genesee County Land Bank, may be the single most important innovation in urban redevelopment in recent years.