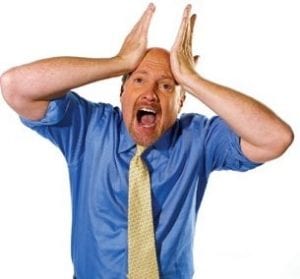 I’m a little late weighing on on this, but this retrial of Jon Stewart v. Tucker Carlson is not sitting well with me.

Countless investors have lost life savings, IRAs, and more “skin” in any game that I’ve ever seen in this economic downturn, and for months, we seemed to accept the fact that while some institutions and individuals were more at fault than others, it was really the fault of many and subsequently everyone’s mess.

That is until last week. That’s when we found Jim Cramer of CNBC’s “Mad Money” to be a less-than-formidable scapegoat, a poster child, if you will, of CNBC’s and the overall business media’s knowledge of “the game” of Wall Street and how they at best, haven’t done their job in properly guiding people through the financial crisis, and, at worst, offered outright misinformation, resulting in massive reductions of personal wealth.

As a journalist, I always welcome heavy media analysis, not only because it gives us the opportunity to better provide useful information, but because it also promotes sustainable communities, inasmuch as an informed public can better make decisions for itself. I am also immediately skeptical when people start blaming the media for things.

But in the case with Jim Cramer, I don’t need to engage in autoanalysis. Anyone who has even watched three minutes of Mad Money knows that Cramer, a former hedge fund manager, is a TV personality first. “Useful Information Provider” falls way, way, way down on the list.

CNBC has an average viewership of 300,000 (Bloomberg TV’s average is 10,000, and CNN’s is roughly 700,000), and you can find people tuned in to it in newsrooms and financial advisor offices around the country. People are watching the stock ticker, Market Watch, or even Squawk Box, but when Mad Money (I almost wrote “Mad TV”) comes on, I can’t imagine those 300,000 view Cramer like E.F. Hutton, particularly when he begins throwing around set props, pushing big buttons — things from which little kids might get visual amusement, but sophisticated traders and investors? I might be wrong, but I just don’t see it.

So, when Jim Cramer sat there, with his sleeves rolled up, as is his trademark look, looking like he was ready for a fight, and ate the porridge spoon fed from Jon Stewart, it could be viewed in a number of ways: an admission of guilt, steering watchers to buy stocks of Bear Stearns only days before it went under; an acknowledgment of subpar financial analysis; a tacit recognition that he was playing “the Game” even when he knew better; or simply as a feeble entertainer unfamiliar with the lashings of a quick-tongued comedian; or, most likely, all of the above.

But none of that matters, I think. Good for Jon Stewart for calling this guy out, but at the end of the day, I think it makes for just another inter-Cable foe; more Premium Package Enmity, like Olbermann v. O’Reilly. While Jon Stewart and the Daily Show provide an invaluable service when it comes to not only entertainment, but also to information dissemination, this battle is another time-waster. Cramer is an entertainer, and frankly, a bizarre target for Stewart. I recall the more useful conflict between Stewart and Tucker Carlson, then of CNN’s Crossfire, when Stewart, using colorful language, criticized the program’s “either/or” delivery of the news. THAT’S the type of programming we need to rally against — the stuff that doesn’t report the news, but takes news, tears it in half, and has it fight itself in a TV studio.

Don’t waste your time blaming the Jim Cramers of the world for the financial crisis, there are much, much, larger fish to fry, both within the media and on Wall Street.